Train the Boyz in the ‘hood as Brain Surgeons so they get jobs when all that offshoring is over – sort of  per Alan S. Blinder

Offshoring has been in the news for over 20 years, now.  We just came across this link to it from a really good new book:  The Servant Economy, by Jeff Faux (pronounced “foe”).

Point   LastTechAge’s view should be clear by our comments on opinions by Paul Krugman and David Brooks.  Offshoring is just one  of the organizing mechanisms that underlie the America’s Income Pump that is effectively shifts increasing share of net earnings from the lower incomes into the top earners in this country.

During the discussion, Alan Binder said that any task done by a computer could just as well be sent off shore for [much] cheaper processing, and he corrected an earlier 42 Million potential lost job estimate to a range of probably 30-40 M jobs. The computer thing seems a reasonable outcome, but in the following year, 2007, a Harvard Business School study showed that 42 M  was definitely a lower bound on the jobs that might be lost.

During this radio interview Diane Rehm asked Blinder what the jobs were that we could retrain everyone into (listen to that conversation).  First he said that it had to be in the service economy since in his ideal world we would not have ability to make anything.  But there are a lot of well paying jobs there.  Just use your imagination.  Diane asked for him to name a typical high pay service job.  “Brain surgeon” said he.

Question How many brain surgeons are in this population?  Ok, now compare that to the number working for under $50,000.  Prof Blinder cannot think that we will try to train the high school drop-outs, the non-college graduates, those who could only find funds for a Bachelor’s degree, or those who want a safe healthful life but can not stand school.  There is no bloody way anybody could afford to train all the people truly left behind.  [editor note:  ‘bloody’ is not a swear word in US English. You guys who learned your English from Brit teachers need to know this.]

Introducing neo-liberal to our discussion.

Neo-liberal is the name sometimes given to brainiacs like Bill Clinton, Larry Summers, Alan Blinder, Tom Friedman.  They are gung-ho to demolish our manufacturing capabilities and retrain everyone for important thinking jobs.  The claim is …

The rising tide generated by destroyed opportunity in the U.S.  generates a tsunami of hope and good fortune that raise all boats;  everyone in the World will live long and prosper.    ←  Old trickle-down in new clothing, with fangs.

This may provide a liberal tag;  but they are Neo because their concern is for the happiness and welfare of the top-cream in our population.  It is the the top earners who have received really high rewards while any benefit gained at the lower end has been heavily diluted by the huge vast overwhelming mass of humanity elsewhere in  society. And there is no reason why this should change.

Neo-liberal gets added to our list of US Income Pump components. It is not one of the gears, but it provides the power to drive it.  And so the flow of money accelerates from the lowest to the richest.

Blinder let his hidden biases slip out.  Neo-liberal advocates are working for the topmost peak earners, our beloved ultras. They want to see this group really succeed and at the horrible expense of those discarded, left behind. 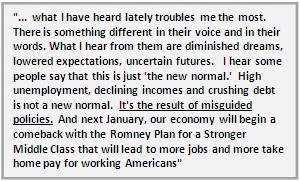 The Romney/Ryan plan is to increase offshoring as Mitt has done throughout his career.  To make Ryan’s statement work “Middle Class” must be redefined to incomes between $250,000 to $500,000. Yes, now Ryan’s plan makes sense and; it is more than simple political rhetoric.

Let’s not be negative here.  People do not like downer images of our future (ref NYT).  So, be happy!  All our young inner city people will be Brain Surgeons in that sweet time to come!   … and read The Servant Economy.

Charles J. Armentrout, Ann Arbor
2012 Aug 13
Have a comment? Click on the title of this post, go to bottom, let us know.
Listed under   Economics    …thread    Economics > Inequality
Related posts: Click the INDEX tab under the Banner picture

I am a physicist with years of work in fusion labs, industry labs, and teaching (physics and math). I have watched the tech scene, watched societal trends and am alarmed. My interest is to help us all improve or maintain that which we worked so hard to achieve.
View all posts by LastTechAge →
This entry was posted in Economics and tagged Alan Blinder, Bill Clinton, Diane Rhem, Jeff Faux, Larry Summers, Mitt Romney, Neo Liberal, offshoring, Paul Ryan, The Servant Economy, Tom Friedman. Bookmark the permalink.