Secretive Tri Alpha Energy makes fusion progress. Has private backers and Government ones too, but –Russian– not U.S.

We finish our Fusion Paths Not Taken  series by looking at Tri Alpha Energy (TAE).  TAE was started with the explicit goal of using the difficult  p-11B fuel and did not want any part of the toroidal strategies in vogue at that time that were commonly considered incapable of reaching the required temperatures.  Tri Alpha was the center of advocacy for the fuel, and has weathered continuous criticisms.

p-11B is the aneutronic (non-neutron generating) fuel that would perfectly complete the fusion dream.  Except that

Click any image to see its full sized version. 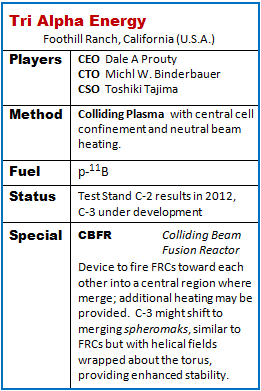 Tri Alpha Energy (TAE) was formed in 1998 when  Norman Rostoker, professor of physics at the University of California – Irvine was joined by Hendrik Monkhorst to set up the company near UC-Irvine.

Monkhorst was from the CBFR project at the University of Florida.   Michl W. Binderbauer (UC-Irvine) was the co-author of the 1998 proposals CBFR + p-11B paper and current CTO at TAE.

The goal was to develop a compact reactor that did not use fuel that emits neutrons and  could be heated to the proper level, as opposed to the main fusion research programs. 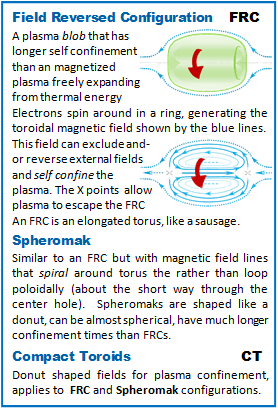 Almost immediately they were challenged by the physics community.  TAE responded that the critics did not take all the details into consideration.

Later, analysis at the University of Texas – Austin showed that, to generate net power, a p-11B utilizing reactor would need at least 85% efficiency.

TAE  proposes to use Inverse Cyclotron Conversion (ICC) techniques to extract energy from the fusing system.

Fig 3 is a restatement of magnetized plasma concepts that were discussed in previous posts in our Fusion Paths Not Taken series.

Tri Alpha uses all three, so we present the meanings again.

The company operates in secret, it has no website and there are no images available of its Principals. It is said to employ 150 people; it is said to have significant support; it is said to be building a really impressive next test stand.

The best information data on progress come from presentations made a special meetings and seminars.  Results from the C-2 test stand have been published in a number of journals, beginning in 2011.  See the May 2012  issue of Physics of Plasmas.

Fig 4 shows the diagram of TAE’s C-2 test stand. The CTs are formed in the θ-Pinch regions and fired into the Confinement solenoid region.

Fig 5 is a pictorial drawing of the device.   They report CT velocities of 250 km/s (160 miles/s,  2.5×107 cm/s) when they merge.  Fusion would occur in the central cell and the products would back flow to the “divertor” regions at either end where energy would be extracted.  Rumor has confinement as 2½ times longer than the 2 milliseconds shown.

They are currently using deuterium fuel for diagnostic purposes and there is no indication that they have started tests with p-11B.

Various reports have indicated that the C-3 device should be able to confine plasmas from between 0.1 and 1 second, 100-500 times longer than the C-2 results.  This may require that the CTs  to be used should have helicity, making them spheromak structures.  It will be interesting to see how they accomplish this.

TAE is very adept at getting external non-governmental funding (that is, no funds from the  U.S. government), with estimates exceeding US$150 M (see Forbes, for example).  This makes TAE the best funded of any of the upstart fusion game changers we have discussed. The roster of supporters and board members include Arno Allan Penzias (Nobel Prizewinner), Paul Allen (Microsoft), Buzz Aldrin (Astronaut), and other influential names.

Rusnano joined in early 2013 (owned by the government of Russia to develop nanotechnology-!-) and Anatoly Chubais (Rusnano CEO) joined the Board of Directors.  The Russians (Budker Institute, Novosibirsk)  are said to have delivered neutral beam injectors in early 2014 for heating the plasma (for the C-3 device?).  Note, Neutral beam injectors are the standard way tokamaks heat their plasmas.  → This might be one way TAE plans to inject helicity into their FRCs.

As mentioned above, p-11B usage is very ambitious.  It had been proposed well before Rostoker and Monkhorst founded TAE and every one of the external analyses proved  negative.  Here is one example: Lampe and Manheimer (NRL, 1998), an analysis that p-11B could not generate net fusion power.  Most analyses were based on a 1987 study.

In 2012, Henry R. Weller (Duke University and Triangle Universities Nuclear Laboratory) published data showing the fusion reaction chain actually generated 2 alpha particles of equal energies and a third at lower energy – as had been predicted in 1933. This differed strongly with the 1987 prediction of a single high energy primary with 2 low energy secondaries.

The results from Weller’s team would make energy extraction much easier and may have significant implications on fusion physics and stellar dynamics.  If verified, it could change the acceptability of p-11B as a fuel.  Note:  “if verified.”

In my mind, I had placed p-11B in with spin polarized fusion enhancement and  muon catalyzed fusion — nice dreams, those – but don’t bet your farm that they can be useful.  For now, I will wait for additional independent verification before I make judgements.

This concludes our series on fusion power wanna-be game changers. All are interesting; most have some promise, at least; most have a “yes, but…” observations concerning their physics.  The most problematical, maybe, are the two who plan to use p-11B and must accomplish over a billion degrees in ion energy with enough density to overcome the grossly reduced probability of fusion (per ion collision).    All except TAE  publicly promise results within 4 or 5 years.  On Line By ’79,  eh?

7 of the 8 have good Public Relation departments – the deeply shy Tri Alpha is probably missing an opportunity in not having a website.   It will be fascinating to watch the winners and losers here.  I just hope that the losers can fail because their physics did not work out, not because they could not make their payrolls.

Update: 2015 Jan 09: Norman Rostoker’s death 2014 Dec 25 was announced in the UC-I’s Daily Pilot. His birth and death dates are now under his image, this post. During his lifetime, Dr Rostoker was one of the respected leaders of American physics. We will all miss him.

I am a physicist with years of work in fusion labs, industry labs, and teaching (physics and math). I have watched the tech scene, watched societal trends and am alarmed. My interest is to help us all improve or maintain that which we worked so hard to achieve.
View all posts by LastTechAge →
This entry was posted in Technology and tagged Anatoly Chubais, Budker Institute of Nuclear Physics, C-2, Colliding Beam Fusion, Hendrik Monkhorst, Henry Weller, Martin Lampe, Norman Rostoker, p-B11, Rusnano, TAE, Tri Alpha Energy, Wallace Manheimer. Bookmark the permalink.

3 Responses to Fusion Paths Not Taken -4