We had a chaotic change in our politics. What does that mean?

The United States appears to be experiencing an historic shift in its social order. No need for a bullet list of changes, the  election of Donald Trump is sufficient to show that people are willing for (actually want?) the change. But, what kind of change are we in for?

At the time of this writing, no one can predict where we will be taken by a leader so self centered that he can not recognize the reality of others. We might go anywhere on the political map – from a successful impeachment followed by Republican rewiring of government, to the establishment of a strong-man dictator with the full restructuring of American politics. Trump could not have been elected 30 years ago. But it happened last year.

This is not a post about Trump.  We will examine chaotic changes and how they happen. This is an expansion of the chaos part of an earlier post, President Trump, Triumph of Chaos.

We want to explore what can cause a nearly stable social state of affairs to change. “Nearly” because society’s “state” is only neutrally stable at best; small external forces can dislodge it, and the average central conditions do actually drift over time.  You know that any social order is pretty chaotic due to its many interacting and competing factors – any clear and firm position today could change, maybe suddenly. 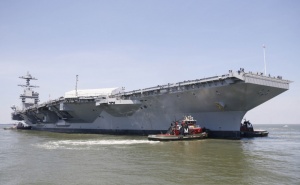 Ocean Ship Strategy – Small tug boats (Fig 1) can bring a huge ship to dock. Their low thrust push will move even mighty aircraft carriers up to the dock – but it takes time; tug captains need patience.

To get a ship to change course, you must expend a certain total effort. Why not get it over with faster with a bundle of TNT sticks? Same total energy involved.

Answer: Bombs yield energy too fast – the idea is to redirect the thing, not sink it. Use a soft push, maintain a controlled speed.

Ocean ship strategy results are predictable. If the tug stops pushing, friction with water slows the ship. This provides a stabilizing negative feedback, and the docking process is smooth and gradual.

Gradualism allows changes to be predictable. Ought to, at least. How do you know an initial gradual start will stay smooth and gradual?

Avalanche Strategy – Avalanches (Fig 2) begin with a tiny bit of snow rolling down a hill. The core picks up volume, excite other snow/ice bits to move, until the ensemble is a moving mass that cannot be stopped.

No one knows exactly what the end effects are.  How will the hill and valley be changed?

Rule: do not use an avalanche for landscape architecture.

Results from the avalanche strategy cannot be predicted exactly. This is unlike the ocean ship strategy. There is no similar resistance to growth for a rolling/sliding chip of ice, and results are not gradual.  If the temperature, slope and other factors are correct, and if the initial material in motion can pick up enough momentum, the result will be roaring growth to the slide – chaotic change.

Here, change means a tumultuous jump from before – the smooth slope with rocks and trees; to after – the final jumbled and torn landscape.

At least one of the differences between finessing a ship into port and causing a run-away avalanche is the environment’s resistance to change.

Chaos Jump … can result from the avalanche strategy.  The rolling snowball is a good analogy for the growth in the probability that a future event will happen.  As the snow-mass starts moving, unpredictable choices set the stage for destruction at the base of the hill.  This rock will move rather than that one, these trees break rather than those over there, all become the prior events that lead to the destruction of this house rather than that one.

Current things that happen become prior conditions for future events, and as the avalanche collects ever more priors, it becomes unstoppable. Prior events are to the conditional probability almost as momentum is to a material object. The more that is accumulated, the harder is to be overcome by normal-sized forces.

In a different post, we will discuss how decades of gradual pushing on U.S. politics led to the political momentum seen in 2016.  The chaotic nature of the process meant that it was Donald Trump who became President and CEO of America, not the one chosen by the group who drove the stealth revolution during all that time.

There are many chaotic physical systems, so let’s pick one: the chaos inherent in our system of human interactions. Society certainly feels like it has stability, even though there may be gentle shifts among its interconnected parts.  For example, our states of inequality and economic opportunity were essentially stable in U.S. society from WW-II until a bit after 1981.

Fig 3 The swinging pendulum of politics

One key feature of a chaotic process is the ‘pendulum swing’ effect indicated in Fig 3.  You can see it in the voting records.

Voters first elect (slightly) conservative leaders, then (slightly) liberal leaders; then again; then again. It may appear as a regular pendulum swing about an average center, but the shifts do not follow a steady beat. They happen, but the length of the swing and when it reverses is only quasi-regular, not steady. Our visualization here uses a simplistic one dimensional model: back and forth between “left wing” and “right wing.”

You and I both understand that a more realistic view would see the net effect as the result of many different, independent societal trends that interact with each other.  Let’s call such trends influence threads.

With multiple political influence threads, social stability ought to be viewed not as an periodic oscillation, but as an almost stable multidimensional orbit that is sort-of constant. Call it a quasi-stable orbit about a conceptual political center.

Visualize Chaotic Orbits   Suppose there were a total of only 3 influence threads that controlled the state of society. Each of these would be independent of the others except for cause-and-effect interactions between the results from each thread.

Fig 4 is a concept graph that to help you visualize this. Since each of the three influence threads are independent, we can draw them as an axis direction (vector). 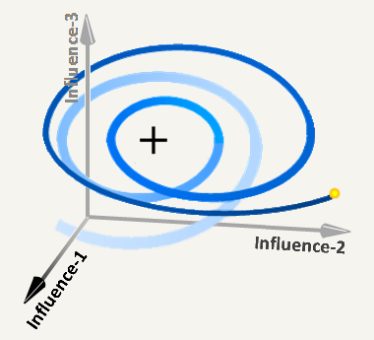 Fig 4  NOW moves in a chaotic orbit about (+), the fixed point attractor.

The blue swirling line is like an aircraft’s contrail. It is the path of the net effect due the ‘pendulum’ swings  occurring for each thread (each dimension in the graph). NOW is the round yellow endpoint that is the sharp moment of experience as events happen. (For more discussion, see our the first of our posts on time.)

Notice that the fixed point ( + ) is the apparent center of the motion.

These are LastTechAge names for markers recently identified by Yascha Mounk and Roberto Foa as The Signs of Deconsolidation of democracy in world politics. Foa and Mounk’s ideas have been discussed by, for example, Amanda Taub (New York Times), and Jonathan Rauch (Atlantic Monthly).

Although  Anxiety, Ethnicity and Inequality seem to be useful to trace Donald Trump’s rise, there are certainly many thousands of such threads that influence the direction of social change.  For simple visualization, the choice of any three does not matter.

In a world of 7 billion people, there may be thousands of millions of independent but mutually interacting, threads affecting social stability.

If there is a forcing function at work on some of the the influences (dimensions), the “fixed point” ( + ) will move. Small pushing forces usually cause small drifts in a system’s fixed point, and Fig 4 does display a slight drift in its center as the NOW point moves in its orbit.

A Chaos Shift can happen if the push is strong enough   If the pushing influences are too large, the direction of the motion of NOW (through concept space) may abruptly shift its “fixed-point” attractor ( + ) to an unpredictable location. Fig 5 presents a such a chaos-shift with our diagram.  An observer must wait at least one full orbit to estimate the position the new ‘fixed’ attractor point. 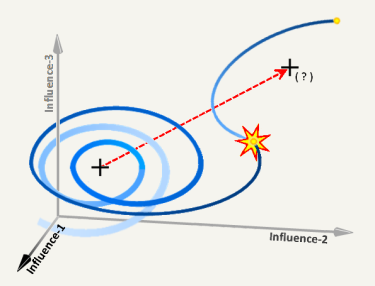 An unpredictable jump in the orbit’s fixed point is much more likely than a minor shift in its position if the active NOW value has drifted too far from its attractor, or if the forcing function is too large or too abrupt. But chaotic systems are not completely predictable (not causal) so a chaos-shift might just happen, no matter what.

Chaotic orbit effects happen for almost every system you can image, not just politics. For any system, plot each influence as in Fig 4; the system average will show some type of chaotic orbit.  See James Gleick’s 1987 bestselling popular discussion Chaos; or Melanie Mitchell’s 2009 Complexity, A Guided Tour – one of the best popularized discussions of chaos and complexity theory.

Charles J. Armentrout, Ann Arbor
2017 Sep 03
This is listed under General a post in the Time-path thread
Have a comment? Click on the title of this post, go to bottom, let us know.
Related posts: Click the INDEX button under the Banner picture

I am a physicist with years of work in fusion labs, industry labs, and teaching (physics and math). I have watched the tech scene, watched societal trends and am alarmed. My interest is to help us all improve or maintain that which we worked so hard to achieve.
View all posts by LastTechAge →
This entry was posted in General. Bookmark the permalink.

1 Response to Shifts and jumps in chaotic systems – USA