‘Flint’, an artist’s summary of the Flint water crisis, has visceral impact on the viewer.

This image won an award.  Flint Michigan is an old automotive manufacturing town in Michigan, about 45 miles north of my town, Ann Arbor. The Flint population is predominantly african-american.

The picture below shows the condition of the water provided by the Flint water system.  Every part of this image is a compelling statement about our past and about our very present issues with what is happening in America today. 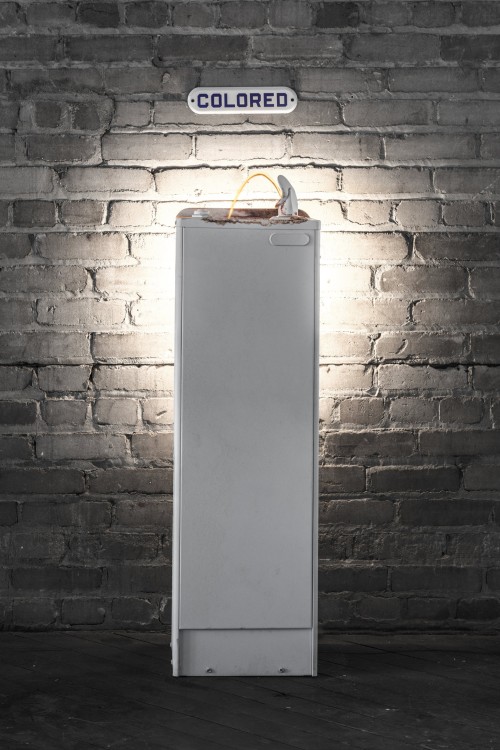 ‘ ‘Flint’ – an award winning work by artist Ti-Rock Moore. Click it to go to the Eclectablog website with full discussion

The image clicks to the original Eclectablog posting of the artwork, if you have any problem reaching it, here is the site link:

For the past 5 years Flint Michigan has been horribly mismanaged by the Republican controlled State government. Governor Snyder ordered city management to be taken over by direct State control; horrible decisions were promptly made.  They disconnected Flint from the clean Detroit water supply that had been used (way too expensive), and substituted water from the local polluted supply, which was much cheaper but was known to be dangerous.  Flint children began to show effects of poisoning in 2014.  The water is still not clear today.

All this must have been way preferable to the original water contract.  It is very difficult to say that the governor and his advisers made decisions were not race based.

I believe that the “Colored” sign overtly refers to the color of the water being delivered to Flint homes.  This is another one of the denotes vs connotes things because it has strong evocation of the U.S. white supremacist laws that were overturned by a Supreme Court decision (60 years ago). That decision began our painful approach toward racial equality. Clearly, we are yet a long way from achieving that goal.

Charles J. Armentrout, Ann Arbor
2017 Oct 11
This is listed under Politics
Have a comment? Click on the title of this post, go to bottom, let us know.
Related posts: Click the INDEX button under the Banner picture

I am a physicist with years of work in fusion labs, industry labs, and teaching (physics and math). I have watched the tech scene, watched societal trends and am alarmed. My interest is to help us all improve or maintain that which we worked so hard to achieve.
View all posts by LastTechAge →
This entry was posted in Politics and tagged #Flintwatercrisis, Eclectablog, Flint, Ti-Rock Moore. Bookmark the permalink.