ITER-2 Machine is being built – will it work?

The long awaited fusion test bed, ITER, is under construction.  The facility buildings are well on the way towards completion and machine assembly should begin in the last months of 2018.      We discussed the ITER machine structure and various fusion concepts in our  ITER-1 post – we will not repeat them here. 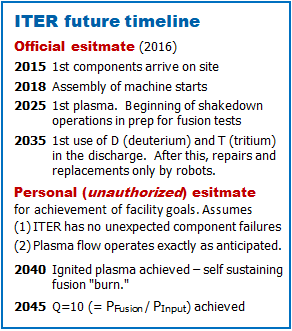 But note– ITER is not an acronym anymore. It is okay to write it ITER or Iter or iter

Comment 1 is the currently expected schedule for ITER operations. The official timeline is reasonable – The 2025 and 2035 targets allow for a reasonable break-in with this new machine.

Assumptions behind the personal estimates – No operating issues arise during start up trials.

(1) Operation schedules base on impatience – Pushing boundaries without checking. In the 1980s, the fusion flagship, TFTR, powered up its TF coils too high and too soon; one of their big coils broke … issues.

(2) Hoping without testing. ITER is a major jump in capabilities. What if long-lived, fusion-hot plasma is operates somewhat differently from short-pulse hot plasma?

Our question – Do the techniques chosen to remove waste heat (power) and particles form a basic issue that is a background worry to the physics staff? Maybe.

The technique to remove the waste heat and particles that flow from the fusion region relies on an array of divertors, that is, on the material surfaces that the plasma strikes first.

Will divertor operation become an functional issue? This is what we discuss. 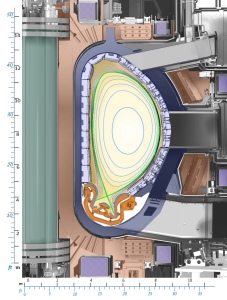 Waste heat  The intense heat from the fusion core will conduct out to its edge (the separatrix) and will cross into the unconfined field volume called the scrape-off-layer (SOL).

In Fig 1, the separatrix is the green field line with the sharp × point, it separates the confined plasma from the unconfined. The SOL is the dark (brown) much cooler plasma outside the separatrix.  See ITER-1 for a more complete description of the tokamak.

Most of the heat flows along the separatrix and out through its × point but some will enter the SOL to cause wall erosion.

Wall atoms can/will •diffuse into the plasma, •absorb energy, •radiate “like mad,”  •cool the plasma, and •quench the fusion.

Waste ash  What is left over from a fusion reaction is a neutron which has four fifths (80%) of the energy, The other one fifth (20%) of fusion energy is very high energy helium nucleus (called an alpha particle, usually written α).

Neutrons will be captured in the wall blanket, combine with lithium (Li) there and form new tritium (T) for fuel. Neutron energy will be converted to electrical power and sent to the grid.

Alphas are very hot when formed, and will slow down in the plasma, passing its excess heat to the fuel, and supporting fusion temperatures. This is what is meant by ignition.  But the slowed α’s become a problem.  If there are too many α’s, they will radiate significant power from the plasma and cool it down. The slow α’s are called the fusion ash. Ash must never be more than 10% of the plasma,or the ignition will quickly quench – the plasma will sputter out.

The problem with waste   Ionized materials in a plasma radiate power proportional to the ion’s atomic number (called its Z value) squared. This is a fusion “poison” because the energy needed to heat the fuel can be radiated away by the high Z contaminant before fusion temperatures can be reached. Comment 3 shows various Z values. 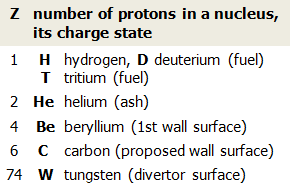 Helium (α’s) radiates with 4 times (2 squared) the intensity of the D or T fuel.  But W radiates  5 476  times more than D or T, more than 1 300 times worse than the helium ash. If the divertor’s front surface erodes and back-diffuse into the plasma, it will be a “we have a problem Houston” issue. (You don’t recall Apollo 13’s cry for help?  See movie!)

The divertor  The design must address the issue of waste heat/ash eroding its surface, even forming a cloud of cold waste gases just above it. If not handled properly, this stuff could back-diffuse into the plasma and enter the confinement region.

The fact that the × point of the separatrix is located inside the divertor volume is good design. This has been shown in current tokamaks  (current, smaller machines) to be effective at  collecting much of the waste moving through the SOL  as possible.

Few tests, though have been done when the central core was at fusion temperatures.  And no tests have been done on a machine that runs fusion plasma for 10 minutes.

Previous tokamak tests all used cryogenic pumps very close to the divertor target surface. Cryopumps have very cold surfaces that freeze gases onto them.  They do not pump helium and saturate with extended use at high pressure. Cryos are completely unsuited for for ITER, which must use turbomolecular pumps connected by very long ducts. But even high performance turbopumps do not pump helium very well.

First problem  If a stagnation cloud of ash develops in front of the divertor, the chance is good that part will flow back into the confinement region, especially during a long pulse.

Second problem  The huge power load onto the divertor’s target front surface is expected to be factors of 10 larger than in any current machine. The divertor target surface will erode much faster than seen anywhere before and may result in substantially higher high Z contamination of the central fusion region.

Both problems would be a threat for successful net power generation.

Why not do actual tests on a current tokamak?  People have been doing them for the past 40 years, at least.  But no existing machine can test all of the proposed divertor strategies because they cannot generate 150 M degree plasma that lasts 15 minutes. Also, certain strategies require more space in the chamber room than currently available. This insufficient data set is what worries me.

History is littered with rejected proposals for divertor test machines. Recently, Nature (July, 2017) reported that an Italian request for funding of a new divertor test tokamak had been postponed or denied. But some new test programs are starting up.  The superconducting Tore Supra (down the road from ITER) was rebuilt and recommissioned (December 2016) as WEST (the W means tungsten);  China has EAST to run with W-Be alloy walls; there are others. ITER is being manufactured; can new tests help?

How did we get to this point?

The physics/engineering community have always worried about protecting the walls from the plasma waste at initially tried shields of high melting point metals. That worked, but high Z contamination was a problem.

People have known how to build divertors that work for over 35 years. 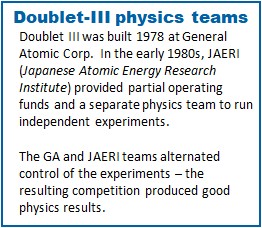 Fig 2 was colorized from the GA 1982 Annual Report – TF coils copper tone; magnetic field shells blue lines; separatrix green line with the × point. The primary limiter shielded the walls, and always poisoned the discharge. Divertor shots have the (unused) limiter outside the separatrix. Most edge plasma rapidly streamed to the × point, then outwards.

Fig 2(B) The expanded boundary  (XB)  spread the plasma power from the × point through the lower volume to reduce the intensity when it struck the wall.  It was the idea of GA’s Nobuyoshi Ohyabu (currently at Japan’s LHD facility):  Expanded boundary approach to impurity control in tokamaks, Nucl Fusion 21 519 (1981). 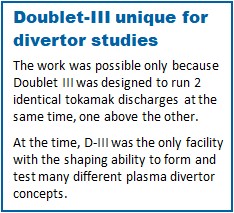 Fig 2(C) The JAERI technique pulled the × point well below the core and spread the exhaust onto the inner wall, then into the lower volume, Comment 4.

Both techniques worked well at reducing the high Z contamination of the plasma. The key is that the entire lower chamber was available to expand into, significantly reducing the impact intensity.

These tests have been called the “the first advanced magnetic divertor configuration experiment” (see p29 of this  Soukhanovskii link).  Expanded boundary divertors are one of the few correct paths for long pulse tokamaks (Comment 5).

3. Why are divertors still and issue?

At least two answers to this …

(1) Cost reduction – ITER was too expensive and was reduced (1997) by reducing size.  An XB as in Fig 2(B) would have made the chamber and TF coils twice as big, twice as expensive. 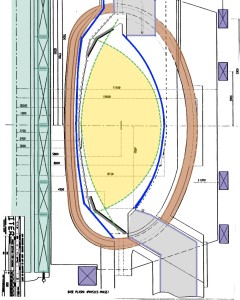 Fig 6 is my colorization of a 1988 report.  This was a “reference” design, probably from an older INTOR design. It is close to today’s evolved machine, but with much more open divertors …

Over the last 35 years, there were many proposals for smaller tokamaks with higher risk of failure.  They were rejected by our DOE.  Many had divertors, but at least one was for a cheaper, divertor-less ITER.  This generated answer #2, Suspicion.

Expanded boundaries (XB) require a large part of the vacuum chamber for the plasma waste. This would sacrifice an expensive fraction of the main chamber; if this were the only solution, it might be a program killer.

But there are (somewhat tested) divertor refinements to the basic XB. The super X divertor uses special coils to divert the exhaust away from the burning region. The snowflake divertor uses coils to generate multiple hit points on the target surface, reducing the intensity in each.

ITER has a potential long pulse-length issue for 2 reasons:

People in the fusion community understood this worry – divertor design could block steady state operation of a fusion burn (see the end of this linked article).

A question has been around forever… Why build the monstrously expensive ITER? Why not one of the cheaper, smaller, more efficient designs?

Imagine you are the manager –  of a project to demonstrate an ignited plasma with significant power generation.  You have huge governmental funding.  The project must not fail; if it does, it will be a very long time before the governments of the Earth do this again. But, hey: no pressure.

Now pick.  Which door would you choose?

Charles J. Armentrout, Ann Arbor
2017 Aug 12
This is listed under Technology a post in the Fusion-MFE thread
Have a comment? Click on the title of this post, go to bottom, let us know.
Related posts: Click the INDEX button under the Banner picture

I am a physicist with years of work in fusion labs, industry labs, and teaching (physics and math). I have watched the tech scene, watched societal trends and am alarmed. My interest is to help us all improve or maintain that which we worked so hard to achieve.
View all posts by LastTechAge →
This entry was posted in Technology and tagged Doublet III, Expanded Boundary, Fusion ash, ITER, ITER divertor, ITER timeline, JAERI diverted plasma, Snowflake divertor, Steady state ITER, Super X Divertor. Bookmark the permalink.