What’s not to like about compact fluorescent lights (CFLs)?  They use less energy than incandescent light bulbs (ILBs), they are cheaper in the long run, they put out lighting with selectable  hues, they are environmentally friendly, and they are directly available for all the lamp sockets in all the electrical energy using homes in the world. 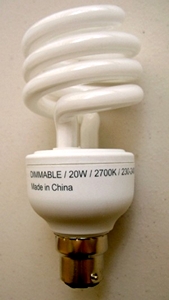 CFLs are so green they rank high on the list of  non-controversial good-guy bumper sticker topics.

But is it true?  After we go through many of the issues, our conclusions are:   If everyone cooperates with CFL use,  then the general happy conclusion is quite possibly  right.  If anyone takes shortcuts then we may be in trouble.  I think CFLs may,  indeed, represent a bumper sticker-green issue,  but they come equipped with the inherent problems of all utopian schemes.

If the manufacturers cut corners to increase profits, if the user tosses the bulbs into the convenient trash, if standard city recycling procedures are not careful enough, if the landfill operators do not search the bags being dumped,  and finally, if the user makes the the wrong  selection, CFLs will be less than satisfactory and perhaps environmentally dangerous.  Here are several acronyms used:

CFLs are most efficient.

Quick aside.  Energy is what you pay the power company for.  Power is the thing measured by the meter on the wall; it shows how fast you use that energy.   Power is measured in Watts (W) and indicate how fast the electrical energy flows into the light bulb.  Lumens  (Lm) is the number that tells how fast the bulb generates light energy that  flows from the bulb.

ILB:   A 100 W light from my shelf is rated at 1550 lumens, 15.5 Lm/W. It has a 1500 hr rated lifetime.   I conducted an informal study of a range of from several internet sellers, this study is neither complete nor comprehensive.  Bulbs have different lumen ratings, and the range for a given wattage and variation can be large. This is a recurrent comment on ILB, FL and CFL bulbs.

ILB conversion rate into light for range of Watts

We really have to stop looking at wattage level when buying a bulb.  If we only want to control power expenses, we should leave the lights OFF and go about in the dark.  If we want to light the room, look for the brightness rating – its lumen value.

These figures are my informal (non-rigorous) review of the ILBs offered for sale today (July 2011).  As you can see, there is a considerable spread in brightness for any watt you purchase.  Dotted lines are hand-drawn to aid visualization. The wide spread in Lm/W at any given bulb wattage is due to the many different ways to assemble a bulb; these are manufacturing issues.

For any Watt value, the very highest Lm values usually corresponds to the shortest lived bulb, usually 750 hours. The very lowest Lm values to correspond to the cheapest bulbs.  In between, the estimated lifetime ranges from 1.5 k hours near the top Lm to 20 k hours nearest or at the bottom Lm value.  ILBs become more efficient as the watt rating rises.

How ILBs work – Electric current flows through a thin metal strip (the filament) mounted in an evacuated bulb. The filament heats and and radiates nearly as a blackbody object.  For a 75 W bulb, the “blackbody temperature” is about 2700 K.    These bulbs are efficient radiation generators, but light emission peaks in the long wavelength IR (infrared) region where at least 90% of the energy is emitted.  Since IR light is not visible it is wasted.   As the wattage increases, the temperature of the filament increases and the peak emission moves closer to visible – the bulb becomes a more efficient generator of visible light. Ref our general PDF:   What Does Color Temperature Mean.pdf 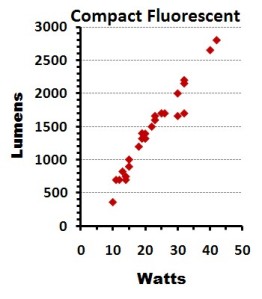 CFL:   I did a similar web search for compact fluorescents.  I want to compare with IFL so these are selected data. All points are for  bulbs rated with a   Color Temperature of 2700 K.  No other temperature is included is in this set. 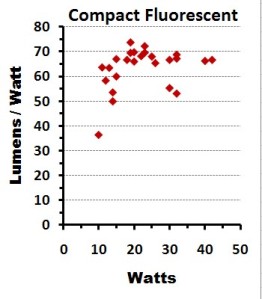 CFL efficiency is the clear winner over IFLs.  Offices and factories across the nation and around the world are illuminated by them.  These is no  contest for their use in commercial buildings.

In many CFL-booster texts, a value >  70 Lm/W is used.  Just by looking at the graph, we can estimate a more accurate value of 67 Lm/W.  Notice that even if we used the lowest value of 35 Lm/W, CFL efficiency is better than twice that of an ILB.

Conversion efficiency of 67 Lm/W is probably a better  “typical” value than either 75 or 35.  This is a very small sample size.  The largest variation is 30% for the 15 W electric input.  30%  may be a better figure of merit, than the tighter variation for the rest of the graph.  The right way would be a truly random selection with many samples of CFL bulbs across the wattage range, rather than my quick survey.

30 percent?  One should expect better consistency than this from brand to brand, because CFL light generation is standard: vaporize Hg, run a current through it to excite emission of UV, convert UV to visible at the inner coating of the tube.  These are all well understood effects.

This highlights the difference in visual light efficiencies between CFL and ILBs.  ILBs are highly efficient thermal light sources, but most of the power is out of the visual range, in low energy long wavelength infrared that cannot easily be up-converted to visible.  CFLs rely on atomic excitation to emit ultra violet light – a process less efficient than thermal emission.  UV is also out of visible range, but in higher energies which are easily down-converted to visible.

For more discussion, click on our link (above) for “How Fluorescent Lights Work.pdf”

The first question about this efficiency discussion must be –why the difference? The physics says fluorescent must be more efficient, overall, and TV tubes have been made in quantity since the 1940’s.  The result cannot be a structural CFL issue.  Fluorescent  bulb manufacturers obviously do not to bring up these topics.  The intrepid LastTechAge Commentator will now set aside his experimental science background,  abandon further searches for unavailable data, and enter the wooly realm of anecdotal evidence.

From my viewpoint: the large variation must be due in part to manufacturing short cuts.   Here is my data.  We put in an FL lamp (F13T5 tube) over the stove in our newly rebuilt kitchen about 20 years ago.  The tubes were about 5/8″ diameter, 20 in length (16 × 500 mm).  They lasted 10 years, but when replaced, they failed quickly. The burned tube had turned brown.  I replaced them several times, as well as the entire fixture – actual lifetime was between 3 weeks to 4 months.  The only thing I could see different was that the US factories closed and the tubes were made in China.

Manufacturers in China have been caught using many short cuts,  I am certain this is part of the problem I saw. These guys send over poison for food, polluted substances incorporated into child toys, DVDs that have copy machine scratches, clothing where the threads pull loose.  But the products are cheaper than anything we can produce;  isn’t that nice?  There will probably be a later post on Chinese manufacture of most consumer products sold here in American;  it is one of my severe worries.

Should we allow products to cross our borders when they were not manufactured to at least OSHA and EPA rules?   Say YES if you think this is an issue of interference with other people’s national sovereignty.  Say NO if you think things made like this have questionable quality standard,  basically enslave the local populations into sub-minimum (US standards) working environments, and therefore can have prices well below those a US factory could meet.    Result of our quick verbal poll:  Congress says the YES’s win, we must accept products that deeply undercut home production.  We have seen factories shut down across the US.

I think that people who complain are ignored because we are tagged as “complainers” – sort of a circular process.  If we did not complain, we must be happy, yes? “This doesn’t work” is not an argument that the bumper-sticker-green ideologues will accept; or perhaps even: could understand.

This is the first post in a series looking at various aspects of fluorescent lighting.

Charles J. Armentrout, Ann Arbor
2011 July 18
Listed under    Technology   …thread   Technology > Fluorescents
Have a comment? Click on the title of this post, go to bottom, let us know.
Related posts: Click the INDEX  button under the Banner picture

I am a physicist with years of work in fusion labs, industry labs, and teaching (physics and math). I have watched the tech scene, watched societal trends and am alarmed. My interest is to help us all improve or maintain that which we worked so hard to achieve.
View all posts by LastTechAge →
This entry was posted in Technology and tagged Fluorescent, fluorescent efficiency, incandescent. Bookmark the permalink.