We are at the tipping point of losing a potential National treasure, the James Webb Space Telescope (JWST). 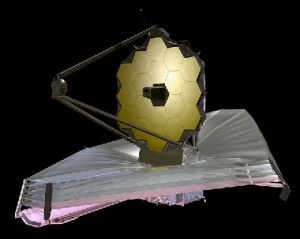 The JWST is a very large telescope to be launched into space to view the universe with ultra high resolution infrared (IR) images.

When launched, it will take its station at the L2 equilibrium point, 1.5 M km on the other side of the Earth from the sun.  It will be in solar orbit but trapped in the Earth’s shadow which will mostly shield it form solar heat radiation.  The JWST will have a heat shield between it and Earth so observations will not be disturbed by planetary heat emission. 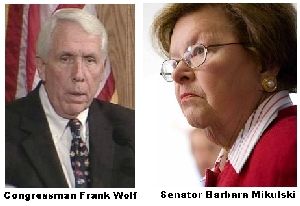 The magazine Science is published weekly by the American AAAS.  According to its  2011 Jul15 issue, the current majority of the House Commerce, Justice and Science subcommittee (jurisdiction control over NASA)  is opposed to the expenses and timeline currently projected for the program and cut out its funding authorization for the 2012 budget (stating in 2 months).

Congressman Frank Wolf (R-Va) is Head of the subcommittee and leads the effort to cut off support and end the mission.  Senator Barbara Mikulski is vocal in her urging of reinstatement of the original support.  Sen. Mikulski is a well know supporter of NASA.

In 2000, the National Research Council released its once-every-10-year Decadal Survey in Astronomy  and put the JWST as the #1 priority research instrument.  It was to be  the next generation successor to both the Hubble Space Telescope (HST) and the Spitzer IR telescope which was not actually launched until 2003 because it was recognized that such an upgrade in size and capability would require a long time to bring to fruition. 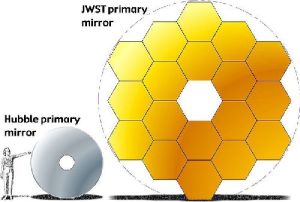 The JWST will be made up of 18 mirrors of gold plated over beryllium.  The mirror assembly will form a mirror 6.5 m (21 foot) in diameter that will view the universe’s light emission from the visible red 0.6 µm to the far edge of the near IR at 28 µm (the part of the low-energy/long-wavelength spectrum that is the deeper red than visible red light – redder than red). Read our discussion of wavelengths here.

JWST has much greater resolution than the HST

Hubble – NASA’s  great observatory for visible light.  JWST will resolve objects 2.7× smaller than the HST can (ratio of diameters) and will see objects 5.5× dimmer  (ratio of areas).

JWST will replace HST only in the HST’s near IR vision (infrared just a bit redder than visible light);  JWST has no visible light sensitivity.

JWST resolution is much better than Spitzer’s

JWST will not replace the Spitzer scope in Spitzer’s deep IR  range (far from visible range).  The very deep IR range has been replaced by Europe’s next generation scope,  Herschel.

The JWST goal is different from either;  it is to peer through the obscuring haze of intergalactic space and give high resolution images of the earliest events in the visible universe.  Its enhanced capability would, however, give it capability to determine details of our own galaxy, unavailable by any other method.

We are at a  branch-point in astronomical capability.  We can complete this or not.  Currently, we have spent about 3.5 G$ on the program, about half way through.  All the difficult mirrors are done and will be fully calibrated by Fall, 2011.  Launch is currently estimated for 2018-2020, given current NASA funding levels.

Costs are expected to overrun budget by a total of 2× before it is launched.  This cost thing is the sticking point.  If excellence were free, there would be no arguments from anyone.  •  Much of the overrun came from the suite of tests that must be done (fully designed after budget was in place).  HST dropped some costly calibrations from its build schedule, had a focus problem and nearly written off as a failure.  JWST is too far for any human aid, even if that were possible.  It must not launch with a glitch that could have been corrected if someone had tested.     •  Some cost overrun due to facts of life of budget-cut during development phase.

Put these costs in the frame of the U.S. budget expenditures.  Our biggest expense are the wars we have been waging since the 2002 invasion of Afghanistan followed by the invasion of Iraq.  For the 9 years through the end of FY 2011, we will have spent 1.227 Trillion Dollars (US) for this task.  This is 136 B$/yr for our wonderful adventure.  Each day represents 373 M$ or a billion US$ every 2.7 days.  (I will not tally deaths.) There is about 3½ B$ left to spend,  about 10 days of an excellent war.

Aside –This is not a hyped up comparison.  This is not arguable – We are clearly willing to sacrifice money, young men and women, and the collateral damage of civilian deaths.   Afghanistan gave us the nice feeling of revenge, though having accomplished this, we have not yet stopped.  The reason for the Iraq excursion is – I do not know.  The standard starting point for such a question is “follow the money!”  We will not do that in this post.

The decision is in the hands of our government.

Charles J. Armentrout, Ann Arbor
2011 July 27
Listed under   Technology    …thread    Technology > Aerospace
Have a comment? Click on the title of this post, go to bottom, let us know.
Related posts: Click the  INDEX  button under the Banner picture

I am a physicist with years of work in fusion labs, industry labs, and teaching (physics and math). I have watched the tech scene, watched societal trends and am alarmed. My interest is to help us all improve or maintain that which we worked so hard to achieve.
View all posts by LastTechAge →
This entry was posted in Technology and tagged Barbara Mikulski, Decadal Survey, Frank Wolf, Herschel, HST, Hubble Space Telescope, James Webb Space Telescope, JWST, NASA, Spitzer Space Telescope. Bookmark the permalink.

7 Responses to In the balance: James Webb Space Telescope