A recent study indicates that we may run out of economical copper by mid century.  This detailed analysis, using a painstakingly gathered database, has been discussed in the news lately.  Despite the fact that production is still currently exponential, analysis indicates we should not expect such growth beyond another 30 or 40 years; expect readily available copper to peak around the middle of this century.

The 2014 Feb 14 issue of the journal Science has a discussion of copper resource projections in its News Focus section, written by Richard Kerr, Science News editor.   The report (the full report is behind Science’s pay-wall) discusses results by Dr. Steve Mohr of the Institute for Sustainable Futures at UTS (University of Technology – Sidney, Australia).

Dr Mohr has developed a modeling program that uses current and past data, per country,  giving demand, supply and resource estimates to project probable future trends.  His program has been used to develop projections for a number of minerals.  The point is that the model aggregates many factors from individual countries into an over all projection of world resource availability.

Here is the abstract and handout at the October Geological Society of America meeting in Denver were by Damien Giurco – UTS, Steve Mohr – UTS, and Gavin Mudd – Monash Univ, all Australian researchers.  Dr Mudd and his workers aggregated the data a couple years ago. At the time, reports claimed these data proved we had no worries for the foreseeable future!   This same data set was analyzed by Mohr’s code, the Geologic Resource Supply-Demand Model (GeRS-DeMo), and produced drastically different projections.

This is the core graphical projection for copper, presented at the meeting, and published this month.  The label table is read left to right, top to bottom to identify the countries sequentially, from the top band on graph to the bottom.    The black dashed line is the World Demand curve.

They use several assumptions with the per-country data:  World population will grow from the 7 G person size of today to a bit over 10 G persons by 2100 (following a UN medium medium growth curve).  They also assume total the world economically recoverable copper reserve as  2.096 G tonnes.

Their data show that we are still following an exponential production growth curve today.  But new copper will become increasingly hard to obtain.

Comparison with estimates by LastTechAge

This is delightful data for LastTechAge.  Several of our posts have derived and used a simple exponential growth model for world averaged data and we have not had opportunity to compare it to a rigorous model before.  The Mohr model aggregates detailed logistic data from each copper producing country to form planet-wide trends.   The LTA model is a 2 parameter calculation and can be done in a couple of seconds.  It uses …

We assume unvarying exponential growth right up to point when the world has depleted the fraction f of its resource pool ( f = 0 … none used; f = 0.8 …80% used).  The resulting model is a simple logarithmic formula,  robust against errors in the size estimates –  A factor of 2 change in the reserve estimates does not change the outcome much.

The real question is:  when will the break in the curve happen? Or, when does utilization growth change from exponential to something else?  We looked at this question in detail in our Patterns in World Oil Production.pdf.   The Hubbert-Peak model uses f = 1/2 (reservoir half depleted)  as the approximate time when extraction become difficult and expensive; this is when the production curve gets a net negative slope.  We have found, that for world oil production, a better estimate of the end of exp. growth closer to 1/3.

There appear to be some issues with the Mohr team’s report.  A regression to the world copper utilization data shows that growth rate as been about 3%/year.  The Mohr work here reports 1.6% growth rate for essentially the same data.  There must be a misprint somewhere.

Fig 2 is production data in a linear plot that displays the characteristic sweep of an exponential curve.   Fig 3 is a semi-log graph of the same data to display exponential growth as a straight line.  Click graphs to enlarge. 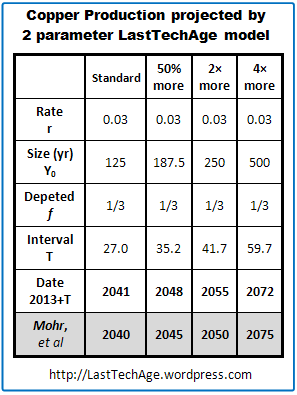 We use our measurement of 3% growth rate, not the Australian team’s reported 1.6%.

There is a third parameter that must be selected with little to guide the choice, the fraction f of the reservoir that has been depleted between time t=0 and t=T.

The dates are surprisingly close together.  The LTA formula assumes exponential depletion right up to the f value’s time, but Mohr et al adds basically non-exponential  curves from each producing country and projects an overall exponential usage to very nearly peak production time.  Maybe the differences should not be so surprising.  It is gratifying to be able to make this comparison.

Make no mistake, the model of importance is that of Mohr and his associates.  This is the hard-fact model, the one to to accept, applaud or question (if you have denialist tendencies).  It may be fun to make estimates with our formula, but the heavy lifting that leads to solid results is done by these Australian researchers.

There is a University of Michigan study of 2008 that says we can find copper in the upper 30 km of the Earth’s crust, and this would give us 5,000 years of use at 2008 rates.  This would grant us 130 more years of exponential growth (LTA model).  But picture the Earth stripped of its top 30 km cover, just for the last dregs of metal – a nightmare vision of Hell.

The image reminds me of the 1974 Larry Niven and Jerry Pournelle  novel,  Mote In God’s Eye, which is fascinating in the horrid way that leaves you chilled (review with spoiler here).  An earlier Sci Fi story about destroying the Earth for its mineral wealth is Planet for Plunder (Satellite Science Fiction Magzaine, Feb 1957) by Hal Clement and Sam Merwin.  Young teenagers of the time (me, and the girl who later became my wife) found this a stunning concept.  Magazine copies are offered on the web, as are hard- and soft- backed book forms.  Plundering the world for its resources is not a new concept, probably has been around long before these examples.

Gail Tverberg has the answer to Infinite Resourcer arguments.  Simplified summary:  Long before we actually hit the wall on resource extraction, the economics will kill the payback from heroic extraction efforts.  We will never reach the end of the reservoir, just the end of affordable resources.  She argues that this may come sooner than resource estimates might suggest.

The good (?) part that is we may have a 3 or 4 decades prior to the sudden drop in copper supplies.  The bad part is that all will look wonderful during this time; corporations will claim that nearly infinite resources mean – no need to start now in preparing for problems. But within a few years after the exponential growth ends, the world will face copper starvation.

Their models have believable timelines, and we have been warned, though the actual production curves will be controlled by the politics of the time.  With copper, we are about where we were with oil in the mid 1980s.  See, doesn’t that make you feel much better?  Here is why LastTechAge is concerned.
……………………………….
Charles J. Armentrout, Ann Arbor
2014 Mar 03
This is listed under  Natural Resources
Have a comment? Click on the title of this post, go to bottom, let us know.
Related posts: Click the INDEX button under the Banner picture

I am a physicist with years of work in fusion labs, industry labs, and teaching (physics and math). I have watched the tech scene, watched societal trends and am alarmed. My interest is to help us all improve or maintain that which we worked so hard to achieve.
View all posts by LastTechAge →
This entry was posted in Natural Resources and tagged Copper peak, Copper usage, Damien Giurco, Garvin Mudd, GeRS-DeMo code, Richard Kerr, Science Magazine, Steve Mohr, World copper. Bookmark the permalink.