8 companies are looking for non-government funding of their innovative fusion ideas.  Hoax or real?

There are a number of reports in the recent months of Amazing! New! and Simple! ways of generating fusion power. Fraction of the cost of mainline fusion designs! Power cheaper than coal! Whoosh! What could be better than those?

This post is the lead-in to our new series called Fusion Paths Not Taken about the wanna-be game-changers operating in the fusion energy arena. Or, at least, those that are making a fuss in the news media.

FIg 1 shows 7 of (at least) 8 hot fusion aspirants who are generating breathless reports on new ways guaranteed to make fusion power.   And Hey! they each need private funding.   These show scaling to human size (the Helion concept is only described in literature as “truckbed” size.   One of our contestants has not released conceptual reactor pictures, though they are in pursuit of funding.

In posts to follow, we will discuss these efforts that are outside the main line path.  Each has its chosen fuel listed, details in  our analysis  of fusion fuels.

All of these designs use ideas that have been around for decades.  Most are based on tests of low temperature plasmas and most have clever modifications that sound reasonable.

When Enthusiasm Substitutes For Assessment

Independent of the analysis that we present later,  there a few over view thoughts that anyone with extra cash ought to consider prior to investment.

Stellerator, Astron, Ignitor, TFTR (Tokamak Fusion Test Reactor), NIF (National Ignition Facility), Perhapsatron …   Over the past 60 years, these were the enthusiastic names given to plasma test machines as they were being planned around the world.  Heck!  This idea is so cool, it obviously will generate fusion power!

Contrary to anything one might (mis) understand,  not a single fusion reactor has ever been constructed.   But that statement depends on what one means by reactor.  Very Bill Clinton-esque.  Any container holding deuterium and tritium will emit neutrons if an electric spark is fired through it.  A chemistry flask with vinegar and baking soda is a reactor because it holds a reacting substance.   We will mean …

Reactor –a generator of extractable power which can be stored for later use.  It does not have to be more out than was put in, just obtainable.

But, fusion reactor pronouncements have been common. 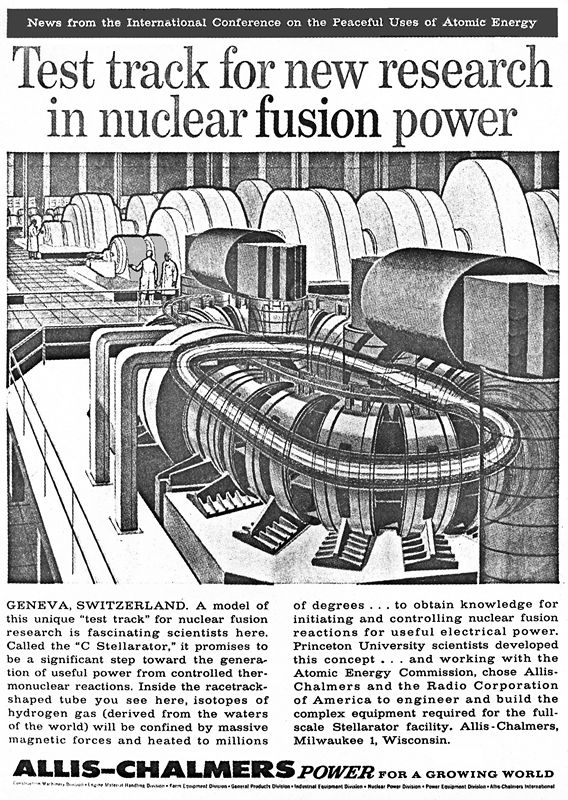 Fig 2 is an advertisement in the Scientific American magazine of October, 1958. This is the issue with Lyman Spitzer’s first popular science article on his stellerator device.  Notice the size of the technicians far in the back.

Now go back and look at Fig 1 using this ad as your measuring standard for all fusion claims.  These are not fakery, not output from Confidence Racket schemes.  They are the optimistic projections of dreamers. 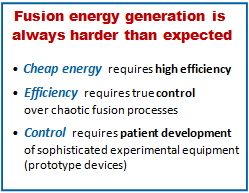 “On Line by ’79!”   KMS Fusion scientists rallied about this slogan in the early 1970s as they built the then most powerful laser in the world (Chroma), their battle cry after 1974 when they produced the most neutrons from any laser lab, anywhere.  They absolutely knew that their optical hohlraum device (they called it DBIS) was the key to success.  And it might have been, if they could have maintained development efforts.

The visionary Kip M Siegal died during a speech to the congressional budget committee in the late 1970s, and KMS badly needed capital to succeed.  (They got a non-technical capitalist looking for his “homerun” and the grudging support from the AEC/DOE. KMS fusion was terminated when Federal support for fusion research was strangled.) Oops.

DBIS might have been the key to success with laser direct-drive, since it was and is the only way I am aware of that offered uniform illumination over a spherical surface,using only a single driver beam.  If they could have sustained its development. Sometimes, optimism can get in the way of success.

How to get funding

At least eight groups are actively trying for funding.  A few have tried TED talks and other ways to do crowd-sourcing, nice for support below US$ 1 M, but this is a scratch of the topsoil when we need to dig deep for the mother-lode payoff of a device that wins over the (unknown) obstacles that lie in the path to success.  Should anyone think that a fusion power production machine should be cheaper than a space mission?  Or a deep-sea submarine?  Or a functional antiballistic missile system?    KMS found that asymmetries in target, illumination and timing kept the now-small laser from generating fusion power.  NIF is currently discovering the reality of instabilities and illumination symmetries.

My boss in magnetic fusion commented 30 years ago that he knew the honeymoon was over when he saw all the publications on “mode-structure” in a tokamak discharge.  Things do not work as naive dreams would have them.  That is the time when tough-minded scientists roll up their sleeves, stop wasting time sleeping or eating and see the job to completion. So let’s get real, here.  We need support way above the one million dollar mark.

Some of the companies have already involved with venture capital sponsors, and I wish them well.  In my experience most VC groups I have dealt with want a high payback, typically in 5 years, or they will chop the enterprise into pieces and sell each chunk off to get the immediate compensation.  IMHO – This is not the path to joy.

The contestants use one of 3 fuel types, which must affect how we judge them.

D-T   deuterium fuses with tritium to make an alpha and a neutron.

D-T has the lowest temperature range for efficient, ignited power production.  The test-bed tokamaks around the world achieve the triple product temperature. 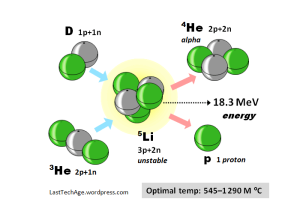 D-3He  deuterium fuses with an isotope of helium and to make an alpha and a proton.  Lower probability secondary reaction generate some neutrons.

D-3He generates about 26 times fewer neutrons than DT.  Reactors could be expected to survive long times without neutron related consequences, but the high required plasma temperatures are an issue for believability in its use, many think that this may be a long way in the future, after D-T fusion has been established.

The biggest problem is the source of the helium 3.  It was found on in Moon rocks in the late 1980s (it is deposted in the crust by the high energy solar wind) and the University of Wisconson’s Gerald Kulcinski has led a return-to-the-moon push to mine 3He for use for safe fusion reactors.  Here is an interview with Dr. Kulcinski. 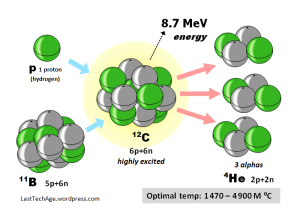 p-11B  a proton fuses with an isotope of boron to make 3 alphas, no neutrons or protons.  Secondary reactions do generate a small neutron background.

p-11B with fewest neutrons, is the safest fusion fuel.  But the multiple (U.S.) billion degree demand is beyond most physicists’ expectation.  This has been evaluated for at least 40 years with non-positive recommendations, for example, in 1998 Lampe and Manheimer published NRL/MR/6709-98-8503. Both from the extreme temperatures and the bad analysis results, one should be very careful in madly pursuing this fuel type.

These diagrams and numbers are results of my own calculations. Both rely on accurate calculation of <σ·v>  (the fusion cross section times relative velocity averaged over the statistical ensemble of states) since the nτ  in the Lawson criteria is inversely proportional to use this.   To get the peak energies for the reactions, I used the 4 parameter fitting coefficients for <σ·v> here.  A 6 parameter fit from the University of Wisconsin here.

All 8 of our contestants use paths that should have and would have been supported if our government had paid attention to its own “American Fusion Engineering Act of 1980.”    The companies we will be examining have low temperature results that look promising, but there is a very long way between positive indicators and  fusion energy power on the grid.  Stay tuned for reviews of the players.

I am a physicist with years of work in fusion labs, industry labs, and teaching (physics and math). I have watched the tech scene, watched societal trends and am alarmed. My interest is to help us all improve or maintain that which we worked so hard to achieve.
View all posts by LastTechAge →
This entry was posted in Technology and tagged 1958 Fusion Reactor Ad, D-He3, D-T, Dynomak, EMC2, General Fusion, Helion Energy, KMS fusion, Lockheed CFR, LPP plasma focus, Naive fusion, p-B11, Tri Alpha Energy. Bookmark the permalink.

2 Responses to Stirring the Fusion Pot