Trump and other denialists reject climate change.  Why?

On June 1, Pres. Trump pulled the U.S. out of the international Paris Agreement On Climate Change and pushed climate change into one of the major stories of the year. This has opened many more questions than can be covered in any single post.

We consider only that small facet of the climate change argument about why many business and political leaders deny it is happening. This is the first of two discussions on why leaders deny that Earth’s climate is changing at an unnatural rate. In Climate shift denialists 2, we will discuss why some religious leaders might become denialists.

Climate shift is real  (A) Prologue

Human-caused climate change is happening right now, and we will start with that.  It is a “feature” of chaos shift events that effects, once done, can never be reversed.  The sea level is rising now. Example: islands, coastal towns, bays and bayous are being swallowed by the ocean  and scoured with its currents and tides. Even if the level drops in a century or so, these features will never be same again. Weather is becoming fiercer; all who die because of extended day temperatures of 120° to 140° F (50°-60° C) will be lost forever.  Although real and currently happening, it is strongly disputed (in the US). We start with the fact of its existence  Definitions …

Skeptical Science features the world temperature graph by Dana Nuccitelli. Fig 1 is from the author’s YouTube presentation. Click the image for a readable version.

Temperature changes are just one of the indicators of our shifting climate. Others such as desertification and rising sea coasts may have more impact on us (as a species).

Check the Skeptical Science website for the 10 top alt facts used by denialists. 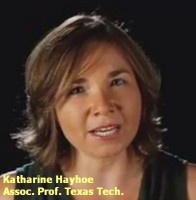 Dr. Katharine Hayhoe (Fig 2) of Texas Tech University is one of the many scientists who talk about the climate-shift problem. Watch as she discusses various climate facts, false and true to a group of interested people.

It is climate that is shifting, the weather will just grow more violent as the change continues.  So…

Q: Why do Americans doubt climate change?
A: Their leaders and TV talking heads tell them to.

Q: Why do people in authority deny what is happening?
A: Motives of  business execs and politicians are easy.  Religious leaders?
The second post will be my very personal answer to Christians in denial.

Climate shift is real  (B) Why are business leaders climate denialists?

This an issue is about how people work. The people who run large businesses are among the highest compensated in the world, many fought their way up to extreme wealth, many were born to it.  If stock goes down in the short term, terrible things happen, so corporate planning strategies usually have a 3-6 month timeline.

If execs admit to climate change, they would shift funds from profits and into environmental mitigation strategies. Such profit reduction is costly in the short term, it may help in future decades, but so what?  Big investors make money by buying and selling stocks, not by holding onto them. When rising profit levels lift stocks, the directors and stockholders respond with big rewards– bonuses and other compensations and perks.

This makes the actions of business giants Charles and David Koch almost reasonable. Well, but maybe not their spiderweb network of dark PACs spreading untraceable money – all enabled by the 2010 Citizens United v Federal Election Commission decision. (CU is a node in their dark net as described in Jane Mayer’s Dark Money)

Fig 3 presents CEOs of two giant companies, both deeply involved with hydrocarbon-based products and, traditionally, strongly opposed to global warming as a threat that must be dealt with.  Recently, ExxonMobile issued statements opposing Trump’s rejection of the Paris Accords.

Who pays for horribly expensive election costs?  It is difficult – political donations are hard or impossible to trace since that 2010 Citizen’s United decision. Some examples… 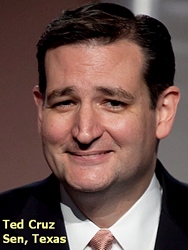 Ted Cruz, Fig 4, was born in Canada and did not become an American citizen until 2014. He graduated from Princeton, the Harvard School of Law, and was a clerk in the Supreme Court. He is a sharp cookie, anything but the “wacko-bird” that McCain called him.  Though he has been called an Hispanic leader he does not classify himself as “Hispanic” (father), “Italian” (mother), or “Canadian” (birth), but as “Southern Baptist.”

He was elected to the Senate in 2013 and is serving his first full term. He has a long list of bullet issues that he opposes, including climate change. He is a staunch denialist.

Facts don’t matter to a climate denier.  Cruz knows the facts of climate change and probably does understand them.  But he dismisses them in favor of policies that maximizes his personal goals. According to reports, he has sided with the ultra rich since childhood. But, without detailed personal data, there is no way to say with certainty what factors currently influence him. But there are a few hints …

• Cruz is married to a (former) VP at Goldman Sacks who provided his health care while he worked to remove such care from the bottom half of the American working population.
• His strongest support has been from 3 billionaire families – hedge fund owner Robert Mercer, private equity operator Toby Neugebauer, and fracking tycoons Farris and Dan Wilks.  At least one of these contributes both to the Koch brothers’ dark web of PACs and to the extremist Club For Growth.
• Wilks and Neugebauer are financially entangled with oil, gas and fracking, which explains their own denialist stance on climate change.

It will be interesting to see how Cruz votes this week on the Republican repeal of Obama’s health care.  As law, it will nearly double the people without health insurance (27 M now to 42 M after passage). The Kochs held a frightening meeting last weekend where they threatened all their resources to defeat any Republican who votes NO. This threat has teeth.

Tim Walberg, Fig 5, is a Representative from Michigan. His current legislative achievement would remove state and city IRA plans for workers (InvestmentNews).

This has the approval (financial support) of business lobby groups, who press for far rightist agenda.  That support is sufficient for Tim to be a died-in-the-wool climate denialist.

He continued: “Why do I believe that? Well, as a Christian, I believe that there is a creator in God who is much bigger than us. And I’m confident that, if there’s a real problem, he can take care of it.”

Walberg’s appeal to God stirred a lot of comment, and we address the religious denialists phenomenon in our next post (Climate shift denialists 2).

The corporate executives are against the Climate Change idea for their own self-interest, and the political Right is against it because of the overwhelming support from corporate donations. The impact of climate change mitigation on oil profitability is the reason most ultra rightist politicians are don’t-bother-me-with-details climate change denialists.

The corporation-politician relationship is conducted against the backdrop of a shadowy group of billionaire families that solidified in the 1950s.  This billionaires’ group include Charles and David Koch, Betsy DeVoss’s family (Amway founders) and many others.  As we have pointed out, these people are either born to wealth (and want to keep it) or have every intention that their grandchildren will be in such a situation.  Their clear goal is to win what we (LastTechAge) call the Slow War. In the late 1960s, they began their conquest of the Republican party with large donations. Today, they are certain that the entire American system is shifting to an oligarchy under their control.

Visualize this:  You are a private person, conducting your own affairs and not very interested in looking about the stage of life for hidden puppeteers. In your memory, trusted leaders have always said climate change advocates are awful people trying to hold you down. What would you think? How would you vote?

Coming up: Why are some religious leaders climate change denialists?

Charles J. Armentrout, Ann Arbor
2017 Jun 27
This is listed under Natural Resources in the >Global Warming thread
Have a comment? Click on the title of this post, go to bottom, let us know.
Related posts: Click the INDEX button under the Banner picture

I am a physicist with years of work in fusion labs, industry labs, and teaching (physics and math). I have watched the tech scene, watched societal trends and am alarmed. My interest is to help us all improve or maintain that which we worked so hard to achieve.
View all posts by LastTechAge →
This entry was posted in Natural Resources, Politics, Pres Trump and tagged Charles Koch, climate change, climate change denialists, Donald Trump, Jane Mayer, Katharine Hayhoe, Koch brothers, Paris Agreement, Skeptical Science, Ted Cruz, Tim Walberg. Bookmark the permalink.