The yen is not rising with unexpected jumps, it follows a 5 year linear trend.

Hiroko Tabuchi published a New York times Business report last Wednesday (2011 Nov 09) on Toyota’s performance.  Ms. Tabuchi is a respected reporter who says Toyota is blaming the surging jump in its homeland currency for its poor recent record. Nice try by Toyota to defend itself.  Such statements make good copy, but the Yen is doing anything but “surging.”

That word in English means to suddenly move forward, to jump or rise abruptly.  It may be a loose translation for the actual Japanese phrase and so my comments might be a bit off target.  But the point is that the Yen has been following an inexorable  linear growth over the last 5 years.   The linear trend is so obvious that I recently wrote an essentially tounge-in-cheek post  on this that predicted parity with the dollar by the end of this decade. 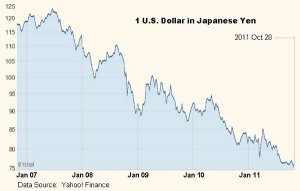 Ok, as an economist, I am a pretty fair physicist.  But with decades of experience with experimental data, I am pretty good with at it.  Here is the graph I presented in my Yen parity piece.  The downward value of the US dollar  (in Japanese yens) is a long term effect with short term fluctuations.  The effects of government interventions can be seen, but the yen has gotten ever stronger, even during this year’s earthquake/tidal wave/nuclear disaster.   Small  blips, but a strong adherence to the straight trendline.

In the 1990’s I told friends and strangers that GM, Ford and Chrysler’s health depended on the current yen:dollar ratio.  They thought I was paranoid or maybe “quaint.”  At 120 yen/dollar the US industry was faltering and declining.  Once or twice, in those days, the yen reached 100 to the dollar and stayed at this penny yen value for several months.  The US car industry picked right up.  To see the effect, the yen had to be strong for maybe half a year;  the data are sparse because when the yen rose, there were flurries of intervention from both Japan and US.  Huge efforts kept Japanese industry strong, and helped undercut US-made competitiveness.

Nowadays, it is China that is delivering the industrial equivalent of a nuclear attack on mainland US industry.  The US ownership class is shifting its intellectual properties there, not to Japan.  The only ones now effected by the yen are Japanese companies, such as Toyota.  Their products are having to compete with US products at valuations closer to reality and they are feeling the pinch.

The technological success that America has enjoyed has been eroding as we have lost our overwhelming industrial base.  This post is a step toward one I have been working on for some time, the evidence for long term “sea-changes” in our technical capabilities.

I am worried that we humans will actually back away from development just now as our resources peak and start to become overwhelmingly expensive.  Are techie stuff to become the toys of the ultra rich?  If so, then we will see a slow back slide to the 1200’s … short lives, poor food, dangerous water, dead children, and the (relatively) wealthy few who will appear primitive if judged by our current standards.

I am a physicist with years of work in fusion labs, industry labs, and teaching (physics and math). I have watched the tech scene, watched societal trends and am alarmed. My interest is to help us all improve or maintain that which we worked so hard to achieve.
View all posts by LastTechAge →
This entry was posted in Economics and tagged Hiroko Tabuchi, toyota, yen. Bookmark the permalink.