Footprints in the sand2 – US Oil

By the late 1930s, U.S. oil industry knew continued expansion was not possible, but lived in a state of denial.

Records of petroleum production are like signposts on the roadway, pointers for future directions for life quality – indicators of what we ought to do for the future of our children.

In our previous Footprint post, we showed data signatures that our American society began the process of changing itself about 30 years ago. These data are like the fossilized footprints from long ago; they indicate that things happened, point the direction, but do not answer the who, why or where of those events.

We look at 3 periods.

Implications Of The Peak 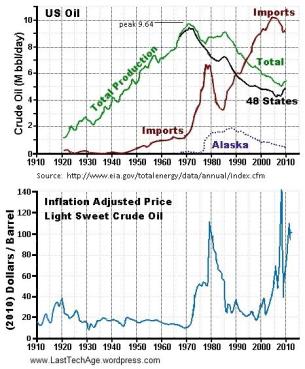 Fig 1 shows the history of US oil production for the 48 states and the Alaskan North Slope fields around Prudhoe Bay.  This is similar to graphs in previous posts, but import volumes and crude oil prices are included.

In November of 1970, US crude oil production reached its all time peak of 9.6 M bpd.

This graph is a summary of recent American history.  Imports volume and crude prices jumped when Saudi Arabia embargoed oil (during the war in the mid east) and when Iranian extremists rampaged.

Look at the import curve: The 1970s’ embargo spike was not part of expected normal events. Project the non-embargo part of the curve across the spike in your mind’s eye: the trend has a smooth, inevitable increase. Prices display the same rise.  Our time of ever-increasing  supply in oil was past; we were either going to ramp up imports and pay more, or give up casual use of oil.  This is the natural way economic order functions.

Recently we have been hearing cheery news that oil production has finally turned up, has reached 5½ M bpd.  Best in 4 years!  Time for party hats? Is the US is heading for oil independence again?   Well, no, we have an upward nudge in production because, at $100+ per barrel, companies can afford complicated techniques. Soon the prices will go up further and even more petroleum will be produced, is that good news, too?

Will we ever again produce as much as we want or need? U.S. demand is currently about 20 M bpd.  Take away the external supply constraints, and demand would increase dramatically.  The technical answer to “Will we produce all that we need” must be NO, all things as they are now.  Although we are not about to hear the empty pop-bottle slurp when the pumps suck out the last drop from the wells, removing crude becomes technically ever more expensive. The price of crude must increase.

Ok, suppose (A) fuel costs rise, and (B) normal people’s income continue its  observed rapid drop? Demand would have to drop. Maybe with high enough gas prices and low enough median wage, we ‘might could’ be able to supply our own demand.

But I would not want to live in that kind of world … tattered cloths, starving/dying babies, watching our ultras party, listening to their self-righteous bragging.

Implications of Production Before the Peak

There is something strange with the pre-peak trend in Fig 1 production – the data points scatter about a model behavior that is a straight line increase (‘linear’ – no curvature).

The issue is that if there are no external restrictions, start up should follow upward curving exponential growth when drawing on a resource.  There should be an upward swoop, roll over at the peak, then descent. But the best model to the Total Production data is a straight line from start of graph (maybe 1920) to shortly before the 1970 peak. 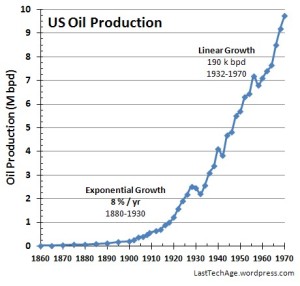 Did the U.S. oil production start with exponential growth?   You answer this with a graph; plot the log of the data, then look for straight lines in the log-linear (semi-log) plot. Click here for details on the evaluation process.

Fig 3: Production started with exponential growth, changing to linear after 1932

Fig 3 is a semi-log plot of the Fig 2 data. The data are scattered around a straight line (the “model”) between 1880 to 1930; nice exponential growth at 8%/year, for  a factor of nearly 100 in total growth.  Is the early data on the same curve? The data from those days may not be accurate enough to tell.

After about 1932, data is scattered about a linear growth line with an average slope of 190 thousand barrels of oil per day. This led to additional expansion up to 1970 by a factor of 4.5.  Unconstrained early growth was over and the best efforts of the industry could not bring it back. 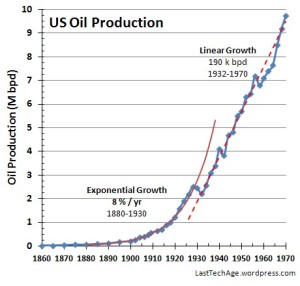 Fig 4 is a a repeat of the Fig 2 linear graph showing the with the two model lines. You can see the model growth curves closely fit of the data.  One might say that about 1956, the linear curve seems to roll over toward a peak, but the start of Alaskan oil production (late 1960s) raised the roll-over pattern.  However, the data span is too small for firm deductions.

All processes where production is snapped up by customers should be exponential growth. Exuberant growth will be damped back only if there are external forces that slow things down.

What must have happened?

What went on in our past?  Exponential growth happens when all production is gobbled up by demand and the producers keep trying to generate more and increase their profits. After the Crash, industry could not re-establish unimpeded growth, even during the massive stress of WW-II.

What really happened? Here is a possibility.  When the new wells becomes hard to find, or producing ones become low and the pump rate drops, the upward moving production curve will change from the exuberant growth exponential form to a curve bending over toward a peak value. This change in curvature is now called the Hubbert inflection point, but has been long understood. Oil production is/was big business involving huge financial stakes. The curvature break just after 1930 must be the first signs of coming reservoir trouble.  They must have pushed hard to open new wells and install better pumps but the crude just was not there for easy growth. None of this was in open discussion. It must be that no one wanted to recognize it.

M. King Hubbert first published his peak oil thesis in early 1949. nearly 17 years after the “roll off,” the start of linear growth.  His best known paper was in 1956 when accurate predictions of peaking were possible.  Hubbert had major problems with industrial politics, he even mentioned them in the early 1970s when I attended his seminar as a grad student.

Industry workers really did know that the end was at hand.  Personal note – In the late 1950s, my parents were good friends with an wild-cat oil well digger and wife. I remember Mr. Wildcater saying that he could not “make a go of it” any more, the oil pockets in our state had mostly been found. The end of the ready oil boom was the unstated reality throughout the industry.

Implication About The Future.

The data show that the U.S. started to reach the end of its oil boom as early as 1930. This was when production began to  roll away from early exponential growth.  There are signs all about that this was seen but rejected.  Too much money, too many dreams were tied to the growth and indicators were not reported.

Things have changed since the pre-peak 1960s.  No one can drive about as we did when Mitt Romney’s Pa ran American Motors.  Hey Old Timers – remember when Papa George’s ads were calling most cars “gas guzzling dinosaurs?” It was really unpopular to say we were running out of fuel, back when we had Pavlovian excitement over ‘muscle cars.’  George wanted to be in politics, but was blocked, sanctioned by his own party (for oil and other kinds of heresy). Today, what would you call a car that drives 6 miles on a US gallon?  In 40 years, what will your kids say about cars going fewer than 40 miles on one?

The future cannot be predicted, so I will not try, here. The best we can do is look at the records, our fossilized foot prints across the sands of time. If all the oil sources in the world were like the US situation, we would be facing an imminent energy crisis that would threaten world order.  Sands of Time is a recurrent LastTechAge theme. We will address a number of issues, next Footprints: world oil.

Charles J. Armentrout, Ann Arbor
2012 Mar 10
Listed under   Natural Resources   …thread  Natural Resources >  Oil
Have a comment? Click on the title of this post, go to bottom, let us know.
Related posts: Click the INDEX  button under the Banner picture

I am a physicist with years of work in fusion labs, industry labs, and teaching (physics and math). I have watched the tech scene, watched societal trends and am alarmed. My interest is to help us all improve or maintain that which we worked so hard to achieve.
View all posts by LastTechAge →
This entry was posted in Natural Resources and tagged US Oil, US Oil history, US oil trends. Bookmark the permalink.