Income shifts out of lower incomes into the upper levels, in a kind of zero sum game

There has been an unusual stir in the recent news about the increase of income inequality in the United States. Wealthy households are better off than ever, while the majority in the population (more then 50% of our families) are seeing their income fall and their jobs disappear.

The flurry of interest is from a confluence of congressional turmoil over Obama’s American Jobs Act, the Congressional Budget Office report released a number of weeks ago, and the ruckus over the Take Back movement. Recently, Robert Pear reported that the U.S. median family income has dropped below $50,000 while the highest earners are seeing nice increases; Eduardo Porter linked the Occupy movement with the CBO report; Paul Krugman has had several columns in the NYT; even NPR has had many discussions on this.

This is not actually new News:  The Huffington Post had a 2009 report on wage inequality published by Prof. Emmanuel Saez (U.C. Berkley) and colleagues Thomas Piketty, Anthony Atkinson, and Facundo Alverado. Saez has led a series of academic studies, the first was for time sequence up to 1998. Saez’ UC-Berkley website should be the starting point of any discussions on this; he and his team keeps the analysis updated, although IRS data source is not available until 2 years after the labeled date.

The trends we discuss are summarized here:  The American Income Pump.

The US Census Bureau has the latest data (2011 Sep) on the distribution of family income in the United States during the year 2010. Other Census reports are here.

(Click graph to enlarge) The horizontal axis lists possible incomes in $5,000 steps (“categories”).  Graph labels (such as 45 and 50) are in $1000 units and refer to the starting income of the bar to the right. The vertical axis  is (essentially) the number of households making any particular income amount. The two category bars on the far right are different: the final right-most is for earners of the top 2% in income (height of the bar), starts at $250,000, and extends rightwards to infinity. The next step left represents the (approx.) 2% of the population with income between $200,000 and $250,000 is actually 10 times larger than all steps left of itself.
Example: A median household income is located in the 45-50 category (those making at least $45,000.00 but less than $50,000.00).

The population is divided into 5 equal sized groups (quintiles) and the location of each quintile division is found by summing category percentages from 0 to 20, 40, 60 and 80. These are marked at the top of the graph. The median income is centered in the 3rd (middle) quintile.  Some observers use the quintiles to label economic “classes” (lower, lower middle, middle, upper middle and upper). These are not universally accepted.

The latest household median income value of $49,445 (2010) is the amount earned by a household where 50% of households earn less and 50% earn more. Buried in the Census data is the fact that the the average number of earners in a household is 3 ½, and the median income for an individual is well below $30,000. There have been lots of media discussion of loss of jobs, time between jobs, etc.

Things are very bad for those households in income levels at or below median, but still pretty good in the top 10% and better, where the real inequality occurs.

Here are the original graphs from studies that ended in 2007, the last date for the full data sets.

These data are from Emmanuel Saez (the top 10% and 0.01%) and Robert Reich (top 1%) and are plotted to fit nicely into the vertical graphing windows.

The data set ended prior to our ongoing heavy “recession”, and some of the median values have changed; the years 2008 through 2010 show that these top income groups experienced a bit of downturn.

The data for the top 10% appear to have the most spectacular effects, primarily because it is smoother with more households in the 10% set than in the others.

For example, the trends for the 0.01% group are partly hidden by the variation of individual fortunes in this a very small grouping (data “noise”).

Rich get richer; the Poor, poorer

Favorite 10%:   Most people like this dataset because it is the smoothest. For example, here it is shown with trendlines added.

Trendlines suggest a narrative about the process.

For example, the time between 1950 and 1980 was a fairly calm, with variations about the flat trendline; little or no overall growth nor contraction during these 3 decades.

From this graph, the best upward sloping trendline might start at 1980, maybe later.  Surprise: The Top 10% displayed the clearest effect in the original set, but shows the smallest actual expansion in the post-Carter years.

U.S. Census Bureau trend:  The following table describes the share in total income by each quartile.from baseline time to 2010.   The rich got richer, the poor got poorer.

For example, in 2010, the middle third quintile, containing the median income value, accounted for 14.6% of the total income in the U.S.

The baseline average was generated using the years from 1967 to 1980 because the government did not start listing household data until then. 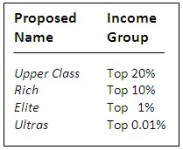 The American Aristocracy:   We have shifted from an expanding society to one based on a zero-sum game.
Top quintile gained at the expense of the lower classes and probably deserves its traditional “Upper class” label.
Top 5%  increased its share by more than a quarter (27%)
Top 1% doubled its income (100% growth).
Top 0.01% multiplied income by five (400% growth);  they are too big to fail and are coddled by Republicans and Democrats, alike. They are the ultra-rich, Ultras for short.   This zero-sum-game has huge implications on  expectations of upward mobility.

Comments: This is a foundation post for the LastTechAge. The trends discussed here underlie all of our problems as a society, including technical excellence.   Check out the summary of all this in our page, American Income Pump, listed, but with many topics left for another day.

Update: 2011 Dec 11  Our top elites are the job-creators with disproportionate amount of talent. Who says – and why?  The Elite Deserve What They Get – Inequality 3.

Update: 2011 Dec 18  Don’t blame all the uppers, the losses by the lower 4/5ths are the fault of the those at the extreme tip of the earning curve.    Overstated Gains – Inequality 4

Update: 2011 Dec 21   The high gains for the upper 20% actually is driven by the actions of the American Ultras.  Elites or Ultras – Inequality 5 .

Update: 2012 Aug 11 Some of the ‘Ultrarich’ pay $0 for income tax per new IRS data (first ever released about these people with small country incomes, most paid a lot less than their legal 35%.   This, from the news report today by James B. Stewart on the New York Times Business Section front page.  Stewart discusses the top group making more than US$21.7 M,  (LastTechAge ultras have median at US$17M).  Read his report for details…

I am a physicist with years of work in fusion labs, industry labs, and teaching (physics and math). I have watched the tech scene, watched societal trends and am alarmed. My interest is to help us all improve or maintain that which we worked so hard to achieve.
View all posts by LastTechAge →
This entry was posted in Economics and tagged income inequality, inequality, James Steewart, median income, new york times, Paul Krugman, Robert Reich, Saez, Wealth. Bookmark the permalink.