In this part -2 of our Paths Not Followed series, we discuss 3 proposals that show promise of being fusion game changers.  All consider manipulating blobs of plasma isolated from any coils that generate magnetic fields for confinement. 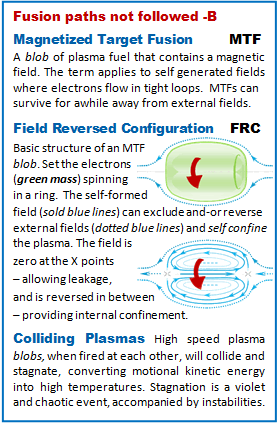 The internal fields in a CT will hold it together for a time (much) longer than required for thermal drift to dissipate an similar but unmagnetized blob.

Side Point:  The FRC with its ring of current is very similar to one of the proposed explanations for ball-lightening.  The FRC has a short confinement time because the plasma can leak out through the X points at either end of Fig 1‘s drawing.  If the MTF formation mechanism can inject helicity also (see Dynomak discussion in Part 1 of Fusion Paths Not Taken), the FRP becomes a stand-alone “spheromak” and the blob should stay together as long as the current path remains a spiral (not a ring). A Spheromak MTF does not have to form, but has been demonstrated.

Will Our Contestants Please Stand Up 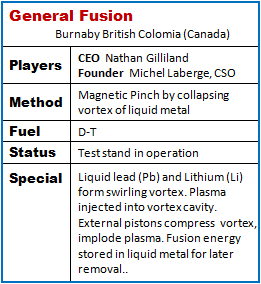 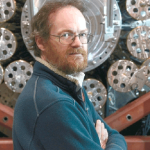 The idea is to 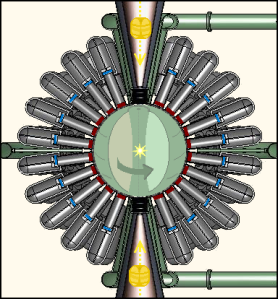 The walls are a rotating vortex of molten metal (a mix of lead and lithium to breed Tritium) vortex (green in Fig 3).

Plasma ‘injectors’ at top and bottom of the design generate RFC plasma blobs (double lobe yellow objects top and bottom), then accelerate them into the center of the vortex, where they collide, stagnate (the central spark in Fig 3) and are ready to fuse.

Fusion energy is released when the monster pistons (blue) slam into the chamber walls (dark red), generating huge inward-focused shock waves that force the final compression to the energy release. 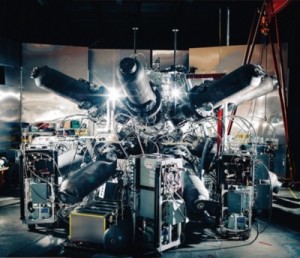 Fig 4 shows the General Fusion T4 experiment.  Sequencing the actions while maintaining cylindrical symmetry is everything. Formation, injection, stagnation and inward traveling shock waves must all happen correctly. Everything will be over in 100 millionths of a second – extremely long compared to laser fusion and ultra short compared to mainline magnetic fusion.

I think that the hard part will be to generate converging shock waves with enough power and symmetry to keep the target from splattering like a egg when hit by a hammer.  And I hope General Fusion does not have to follow the ICF fusion path and discover that the difficulty lies with its symmetry.  Glen Wurden (LANL) presented a positive discussion of this program.

Dr. Laberge was an industrial physicist when he formed General Fusion in 2002. Over the years, he has assembled a team and received support from many investors, including Amazon’s Jeff Bezos. His strategy is a fascinating blend and extension of many past ideas. It could be called liner driven fusion (as Sandia National Lab proposes with its Z machine), colliding plasma fusion like several other proposals, magnetic pinch (based on concepts that are at least 60 years old) or MTF – Laberge’s preferred term. The molten metal vortex wall is very much like fusion reactor proposals from the 1980s. 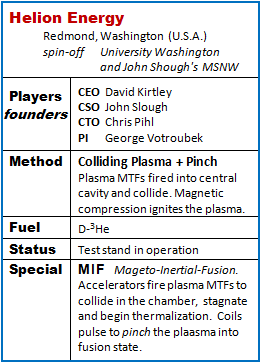 This MIF system was implemented by the four founders.

It uses the fusion engine concept developed by John Slough, Head of MSNW.  All 4 founders of Helion are also behind MSNW and, apparently, other Seattle area high tech companies.

Fuel would be D-3He, producing 50 times fewer neutrons than the D-T reaction to be used with other systems, but has the technical challenge of generating temperatures 2¼ times higher. The low neutron load makes a power generator much smaller, longer lived, and allows for direct conversion of energy in the charged particles into power into the utility grid. 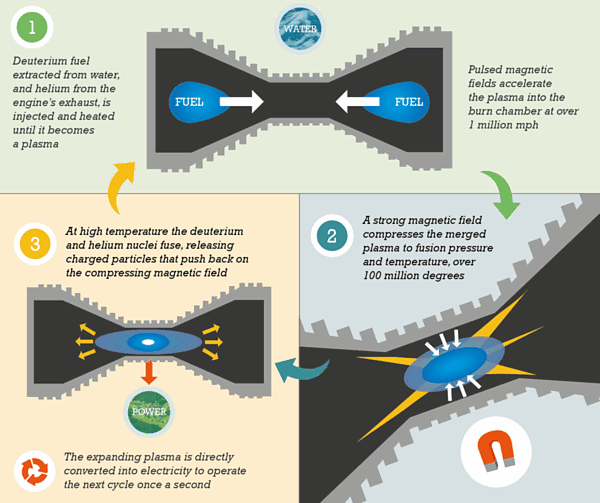 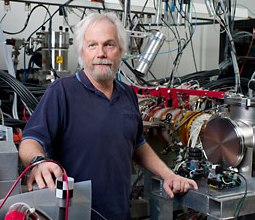 The idea of the Fusion Engine is shown in Helion’s sketches (Fig 6). The 1 million miles per hour translates to about 45×107 cm/s, 10 times faster than the plasmas fired by the guns I used decades ago.

The plasma accelerator is related John Slough’s fusion rocket engine, being developed by his MSNW and graduate students at the University.

The system starts with two MTFs formed by the end accelerators/guns and stagnating in the center cell. They ramp the external magnetic field to pinch the merged toroids to the nearly 550 M degrees that the fuel requires. This is a good idea, and their challenge will probably be achieving this temperature before the MTF disassembles due to internal instabilities. 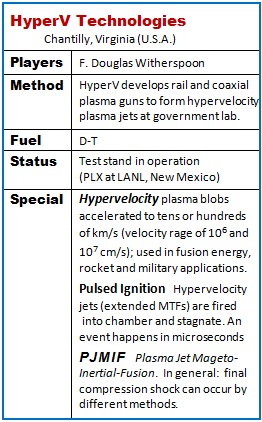 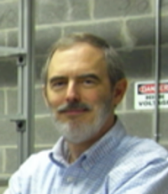 HyperV was formed to make generators of hypervelocity plasma jets, rail and coaxial plasma “guns.” Useful to the military and desirable for space rocket engines.

They form a key technology in the plasma liner fusion effort at Los Alamos,the PJMIF program with its PLX stand.

Hypervelocity plasmas converge on an MTF target, forming a “plasma liner” to push the target to collapse to high density and pressure. This is the offshoot of early schemes where an metal foil liners were magnetically pinched (imploded) to collapse the target into a high energy blob. The foil converted to a heavy ion plasma at pinch onset … why not start with a high inward velocity plasma?  The magnetized target fusion concept that leads to JPMIF was first proposed in 1997. 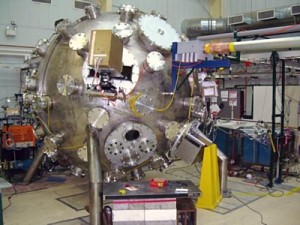 It is 9 ft (nearly 3 m) in diameter with radial ports for 30 rail or coaxial plasma guns (and diagnostics, presumably).

Fig 10 shows a diagram of the full set up, the blue boxes are the plasma jet generators. This has a cut-away to sketch the stagnating beams in the center.

High velocity, fully ionized plasmas do not pass through each other, they form shock waves at the collision interface and appear reasonable as compression pistons in the way General Fusion uses material pistons to produce imploding shocks for its lead-lithium liner. 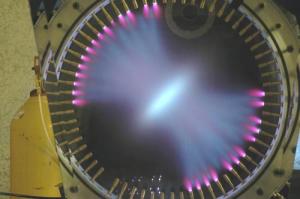 Fig 11 shows results from the TwoPI test stand at HyperV. Very small guns are mounted around the circumference of a circle (the 2π), but only about half are active, here. The central stagnation region is clearer than those in pictures of when the full array of guns operate.

The PLX test will have 30 larger guns mounted on a sphere, not around a circle.  The target will be at the center, and will be magnetized just as the beam stagnates.

As has been often said in popular press reports, MIF means the system will be “operating half way between mainline laser inertial confinement and tokamak magnetic confinement.”  Well, not really.  Half density at 22×1021 ions/cm3 is 11×1021 ions/cm3.  What they mean is MIF is close not to the arithmetic average, but the geometric average,  the half way between the logarithms of the densities.  This half-way density is actually in the low  1018 ions/cm3 range. (Sorry for the math, but popular writers sometimes “get my goat” as my grandmother used to say.)

This slow collapse leaves me nervous. Will they avoid the Rayleigh-Taylor compression instability that has so far defeated the laser implosions at NIF (LLNL) which are 1,000 times faster?

PLX is operated by the DOE Office of Fusion Energy Sciences with research support from 12 other labs. In the science blood-bath that is being prepared by Obama’s appointee, will very worthwhile efforts like this continue?   HyperV Technologies does not currently need external funds to pay for their work (but they can always use support for spaceship thrusters); however, this is included here to indicate that there is currently a truly impressive array of non-mainstream ideas advocated both inside the DOE funding blanket.

These 3 companies employ MTFs in one way or another, and they have demonstration test stands that show that their concept is reasonable. They are maybe 50% of the way to a reactor.  Working to the 90% completion point will require many different skills:  Part will be engineering and physics, but mostly they must demonstrate smooth social skills to acquire support for their effort, the patience to work through the political realities of our current-day world, and the stress management to keep all the threads together and their supporters functioning to the end.  The final 10% of effort will either solidify the reasonable ideas into viable fusion options – or show their method to be too difficult to complete.

All of these companies have well developed ideas.  What is either missing or threatened is the funding to bring the ideas to fruition.       confession – I would love to see my America come back together so that we regain our technical future; one that is liberated from an inherited-wealth Aristocracy.  And it could happen!

I am a physicist with years of work in fusion labs, industry labs, and teaching (physics and math). I have watched the tech scene, watched societal trends and am alarmed. My interest is to help us all improve or maintain that which we worked so hard to achieve.
View all posts by LastTechAge →
This entry was posted in Technology and tagged Chris Pihl, Colliding Plasma, David Kirtley, F. Douglas Witherspoon, Field Reversed Configuration, Fusion Engine, General Fusion, George Votroubek, Helion Energy, HyperV Technologies, Hypervelocity, John Slough, LPP plasma focus, Magnetized Target fusion, Michel Laberge, MSNW, PJMIF, PLX. Bookmark the permalink.