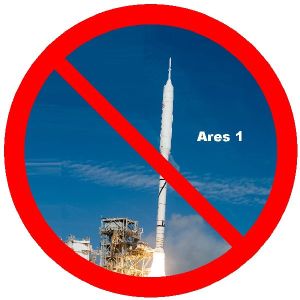 No, this is not a rant on doing things for nothing, nor on assuming private space companies could buy enough firecrackers to get us there.  Nor on chances that we could coax the nice Chinese to let us tag along on the rockets they are building.   No, this is a comment on my personal response to Obama’s asteroids:  “Huh?  Go where?”   Why in the sky would we want to do this when the Moon and Mars loom so strongly in peoples minds?

Recently, the New York Times had letter on Obama’s “initiative” followed by responses published 2011 Jul31 in its Sunday Review section.  Going to the asteroids does not fire imaginations but this review got me to think about it again.

Conclusions   … reasons at the end

We actually should go to the near Earth and Earth-orbit crossing asteroids fairly soon.  But not for Space.com’s assumption that this is to Save The Earth from asteroid bombardment as in a Hollywood sci-fi flick.  Good rigorous scientific analysis of that threat is being done; we understand how to divert threats if seen early enough, but it is all theoretical.  Save the Earth may, in fact have been on Obama’s mind.  But it does not make enough sense to fund this right now.

We still should go,  but don’t send Bruce Willis or even Robert Duvall.   Send out our metallurgical engineers to map the chemical composition of each object visited.
Yes!  This is a post on peak-resources.

This is our century for resource shortages.  Oil we all know about, the U.S. peaked its oil production in 1970 despite huge efforts pump more.  Saudi Arabia has probably peaked production from the largest resource pool on Earth.  But copper, nickel, and many other minerals are likely to reach peak production this century.   By the way, the title of the blog is The Last Tech Age  because, if we lose the ability to make technology, the human species will never be able to rebuild to even 1990 levels of competence.

Reasons – We are going to need new reservoirs for materials 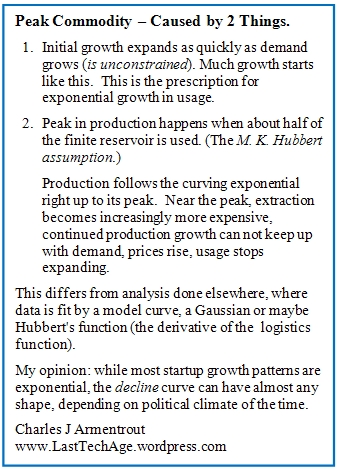 The methods for estimating date of peak production were discussed in Peak Oil -Predictive model.  We need two pieces of information derived from data for the commodity.

Getting Y0 requires a well developed estimate of the size of the economically extractable  commodity and the  total used this year.
Finding r  requires production data forthis year and last year, at least,to get an idea.  Actually, we need decades of reliable production data to first verify that production is in “exponential” growth and to obtain a reliable rate from the trendline.

Find the interval to reduce the reservoir to one half use T = ln(1 + r·Y0·1/2) /r.   (This formula was derived in Page Using A Finite Resource.)  We examine a couple commodities. 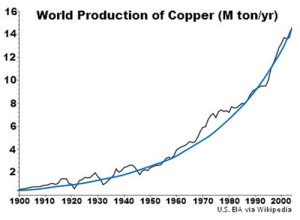 Copper (Cu) – Production is shown here and is pretty clearly exponential growth with significant market instability.   The blue line is the calculated exponential fit for a century of data; production growth rate is 3.3%  (r = 0.033).

By 2053, we will not even be close to draining the Earth of its copper resources, but the mines will have to become much deeper than currently done, possibly going 30 miles down (48 km), according to some published estimates.  Environmental copper will still be too diffuse to be economical, but sea nodule harvesting may become marginally economical.  Copper may approach silver in expense.  Space exploration could be reasonable, if the survey studies were in place.

Nickel (Ni) –  This is not rare in the Earth, currently, it is thought that the deepest parts of the Earth are largely nickel.

A 2009 estimate has usage of nickel growing at a 3.1%/yr rate. Primary (not recycled) consumption is about 1 Mt each year.  Oriel Resource says nickel makes up about 0.0008% of the Earth’s crust, so nickel must be extracted from high concentration mineral deposits.  We have about 100 yrs of available supply at current rates.

Notice that nickel and copper linear lifetimes differ by a factor of nearly 2, but the time to 1/2 usage is almost the same  due to the exponential form of the growth.  These estimates demonstrate  that the formula is robust against minor increases or decreases in resource estimations.

Hydrocarbons (HC)  –  In our discussion about asteroids, does it seem strange to include oil and coal which are both attributed to squashed up dinosaurs and vegetation?  There are reports of HC detection in non planetary bodies such as these.  If we had a large external pool available, we would use it for the extraordinarily important supply our chemical industry needs.    So, we HCs, because this may be our most urgent need, in the very near future.

Petroleum has been covered, we are close to the world peak production, and may have already occurred.  The data on this and other vital HC products (such as coal) is somewhat obscured by our current world politics and the near depression level economic situation we are facing.

Coal –  This is responsible for a quarter of the primary energy and 40% of global electrical energy.  It comes in 4 types: anthracite (about 30 MJ/kg), bituminous (18.8-29.3 MJ/kg), sub-bituminous (8.3-25 MJ/kg), and lignite (5.5-14.3 MJ/kg).  Peat is sometimes treated as a sub-lignite grade, but we will not concern ourselves with this.  Anthacite and bituminous are called “hard coal,” at the low energy lignite end it is “brown coal.”  Production for high grade anthracite peaked early in the 20th century. Coal is produced mainly in a handful of countries – USA, Russia, China, India, Australia, Germany, S. Africa, Ukraine. 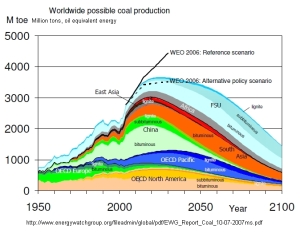 The graph is from a careful 2007 analysis by EnergyWatch.  Peak analysis is muddied by the different energy grades, this chart puts them together in terms of energy production as though it were oil.

Again, we see a broad peak starting in 2020, and becoming ever more important through 2050. Do HC’s hide out on asteroids?

This 21st century will be one of shocking changes in our world. Many more commodities will move out of reach than just the ones shown here which peak 2030-2055.

Sometime about when most of you dear readers start to age, and your grandchildren are entering adulthood, we must either have a replacement or be ready to weather a significant and permanent degradation in “industrial world” lifestyle. 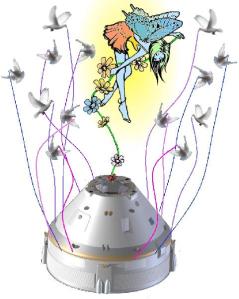 Obama’s call for the exploration of asteroids is actually visionary, although I suspect he was thinking of a Hollywood mass impactor story. We need to do the metallurgical studies to happen in the next decade so that we can actually prepare for deep space mining operations.

FINALLY, there is a real goal for our space program, one with financial bottom lines that even a CEO might understand.  I wish we could do this.  I wish we would do this.  Unfortunately, Pres Obama seems to project a flight of doves gently lifting the space capsule.

Personally, I think he needs something to get the birdies out of the planetary gravity well –  maybe the tooth fairy can tie gossamer bonds and do the heavy lifting, the doves can take over after that.

Charles J. Armentrout, Ann Arbor
2011 Aug 1
Have a comment? Click on the title of this post, go to bottom, let us know.
This is listed under   Technology     …thread  Technology > Space
Related posts: Click the  INDEX  button under the Banner picture

I am a physicist with years of work in fusion labs, industry labs, and teaching (physics and math). I have watched the tech scene, watched societal trends and am alarmed. My interest is to help us all improve or maintain that which we worked so hard to achieve.
View all posts by LastTechAge →
This entry was posted in Technology and tagged Asteroids, metalurgy, Obama, peak copper, peak nickel, space goals. Bookmark the permalink.