How can we maintain social stability when the highly educated are as likely as the poorly educated to become obsolete by disruptive technology?

Paul Krugman published his 2013 Jun 14 OpEd Essay Sympathy For The Luddites in the New York Times.  It is not often that we get a newsprint essay that says clearly what so many have tried to express.

Krugman is one of my heroes.  He is a Nobel Prize winner in Economics (2008) and has a gazillion (just an estimate) technical publications, along with the courage to publish twice a week in a national newspaper on things that are important.  Courageous?  Think of of what Rush Limbaugh says about him.  (Mr. Limbaugh is one of the best paid hired guns the Rancid Right owns; he is under contract for $400M over 8 years … $50M per year … which puts him in the top 0.01% of all earners. Definitely, Rush is  NOT   just one of the common folks.) 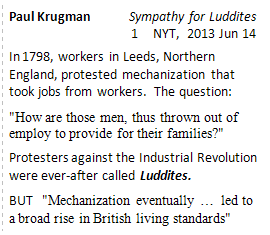 1:  Disdain for Luddites. I grew up scornful of those who viewed technology as bad, as destroyer of jobs for honest workers. Now I wonder – Might they be partially right?

Our summary of his essay is in the right-hand column;  our comments on the left.   Quotation marks mean Krugman wrote this, otherwise, the text is our summary.  Use the  link at the top to check accuracy.

2:  The Old Way had different expectations.  Once, Congress generated major technical programs because the country needed engineers, physicists and highly trained people of all types to build our new future.  What you did, what you were involved with, gave you pride; it was more important than how much you made.

The head of the Fusion Division at General Atomic (in the 1970s) bragged that he paid less than either industry or a nuclear weapons laboratory.  Only a handful of people were given the opportunity to develop fusion power.  We all knew he was right!  Education and self drive were what made the difference.

3:  Life is darker, different from before. When we reached the moon before the red commies, those who had pushed for education programs lost interest in technology.  After all, technical development is expensive, requires funds that more than 99% of all  companies cannot afford.

Government had to foot the bill to make transistors useful, not to speak of advancing weapon capabilities. But, like the length of a skirt, achievement went out of style and U.S. support has been disappearing.  Here is an example. 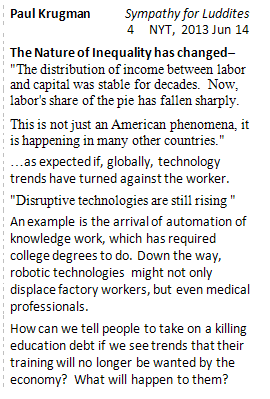 The Income Pump result is that between 1945 and 1981 all the income groups had an essentially constant fraction of the pool.  Then the bullies started sucking income from the lower end.  Our ultras, the very few in the deepest 0.01% of the pool, have gained 5 times the fraction they had during the stable time; the bottom 4/5 of all earners lost income share.  Yes, the Nature of inequality has changed.

In the 1980s and later, as the income fractions started pumping upwards to the top, the goal in U.S. life shifted from what you understand and do to how much you make.  The near-sociopaths who led companies I am acquainted with hunted for home-runs →  giant profits with little to no risk on the part of the monied people. 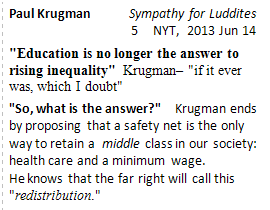 5:  So, what is the answer?  Realistically, is there one?  People with enough income to destroy small countries are determined to keep wealth and power to themselves, as their hereditary due.

During the Mitt Romney campaign for president, a lot of effort was made to prove the rich were the deserving  part of the country because these are the people who made it all happen.  The case was proven by anecdotes of going from poverty to wealth.

If that were true, inheritance would be no issue.  Certainly, the Truly Deserving would be productive without the insider influence and information that wealth makes possible.  Quality people are just successful.  But the guys pushing this mostly inherited their wealth.  Why expect the insiders who exclude fair chance to allow formation of an equitable society? 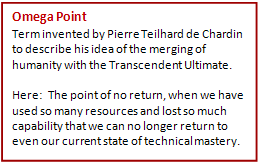 We started LastTechAge to highlight the times we may be moving toward.  When our productive factories  are closed in favor of debt-indentured labor, when our technology is withheld from most people and becomes meaningless, that is when we pass through the Omega Point.

After that, the human species will never again reach our current capabilities.   Can we avoid the Omega Point?

We must follow Krugman’s prescription, or we will hear very self-satisfied talking heads from maybe the Heritage Foundation or Cato Institute arguing for indentureship to pay back debts.  When that happens, brush up on your spelling.

Paul Krugman’s comment here finishes his June 14th essay:  “The clear and present danger is mass unemployment. We should deal with it now.”

Charles J. Armentrout, Ann Arbor
2013 June 17
This is listed under   Economics    …thread   Economics > Inequality
Have a comment? Click on the title of this post, go to bottom, let us know.
Related posts: Click the INDEX button under the Banner picture

I am a physicist with years of work in fusion labs, industry labs, and teaching (physics and math). I have watched the tech scene, watched societal trends and am alarmed. My interest is to help us all improve or maintain that which we worked so hard to achieve.
View all posts by LastTechAge →
This entry was posted in Economics and tagged education debt, inequality, Luddites, new york times, Paul Krugman. Bookmark the permalink.