Just a note on a blog we’ve discussed before.   A perceptive analysis of our civilization’s current status in tapping its finite oil reservoir has been posted on Our Finite World.  It is called World Oil Production at 3/31/2014–Where Are We Headed?.

As we have pointed out before, Our Finite World has many carefully crafted analyses on the usage of our petroleum reserves; this one is a must-read if you are interested in the situation.   Personally, I think of it as a needed update to LastTechAge’s  Patterns in World Oil Production. 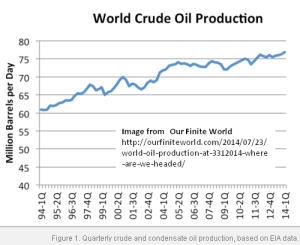 You can see the issue in her first graph (Figure 1) on World crude production. This is an increasing curve but the rate of rise drops off and the production curve is starting to flatten out, though not yet at a peak.  She uses linear graphs which are more intuitive than the LTA preferred semilog ones.  Her points are clear.

Read it then think – how good are projections of future prosperity if viewed under the shadow of outrageously expensive oil?

George Bush filled up our Strategic Oil Reserve in the early 2000’s when oil was about $35/US-barrel.  Today it is in the neighborhood of $100/US-barrel (factor of nearly 3 over the decade).  Multiply this by only 2 for the coming decade then make a do-it-yourself projection as to how we will be living.

Charles J. Armentrout, Ann Arbor
2014 July 23
Listed under Natural Resources  … thread   Natural resources > Oil
Have a comment? Click on the title of this post, go to bottom, let us know.
Related posts: Click the INDEX button under the Banner picture

I am a physicist with years of work in fusion labs, industry labs, and teaching (physics and math). I have watched the tech scene, watched societal trends and am alarmed. My interest is to help us all improve or maintain that which we worked so hard to achieve.
View all posts by LastTechAge →
This entry was posted in Natural Resources and tagged Gail Tverberg, Oil resources, Our Finite World, World Oil Production. Bookmark the permalink.