Should oil trains get limited liability?

Exploding oil cars do not deserve a waiver from the costs they generate.

Warren Buffett has requested that oil train companies get a liability limitation – just like nuclear power plants, so reports Heather Smith  in her 2014 Aug 6 column in Grist.

The rail company, Montreal Maine and Atlantic, had $25M in insurance, but 10 times more was needed to merely clean up their mess.

MM&A declared immediate bankruptcy, the owners walked away, and Canadian taxes (including from the survivors and local owners of lost businesses) is being used to clean up and rebuild.

Buffett (who owns Irving Oil which transports lots of oil) wants a guarantee of limits to liability and cites the Price-Anderson act which limits liability in the nuclear reactor industry.

He wants something similar so that future misadventures are covered by taxes, not personal wealth.

Though Buffet is one of the ‘good’ 0.01 percent, it is not too surprising that he would move to cover his own interests. 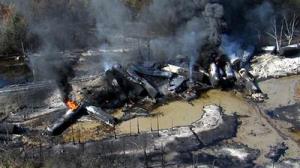 There are new regulatory rules that would require expensive but safer designs for the tank cars – implemented in 3 years for Canada, by 2015 Oct 1 in the U.S.

But be warned, this is too much, too soon, too hard.  Such requirements might slow down Bakken oil field production and what if it leads to shortages?   (Yah, but only if the current rate-of-export is maintained during a temporary slowdown in oil transport.  An export halt during the car change-over would keep the home market from being disturbed.)

The rules are inconvenient for the companies involved. But to keep them happy, how many groups of 47 people need be killed, how many blocks of 30 buildings destroyed, how many James River -type contaminations must be endured  (like the Lynchburg, VA spill last April)?

I cannot see that the sacrifice is worth it.

The core issue is that the current generation of tank car (the DOT-111) is shockingly unsuited for such transport.  These things should have been jerked from service even before the first train load hit the rails!  The new rules call  thicker, better insulated walls, but how about better designs like the double hull LPG ocean tankers?

Actually this post is not about not about engineering or logistic issues with the new rules; it is about limited financial liability for the powers behind the devastations, about aid for the Howard Hamms, the Charles Kochs, even the Warren Buffets among us.

No.  LastTechAge goes on record – the transport companies, and their insurers should be responsible for their own greed.

Charles J. Armentrout, Ann Arbor
2014 July 23
Listed under Natural Resources … thread Natural resources > Oil
Have a comment? Click on the title of this post, go to bottom, let us know.
Related posts: Click the INDEX button under the Banner picture

Postscript:  A final scabbed but bleeding sore.  If the decision by the corporate leadership cause devastation, ethical treatment says they should not be held harmless. This is a another shocking pronouncement – we should end the legal corporate status as a real person.  Paper conveniences must not (at least ought not) be counted as flesh and blood living humans.  I really am sick of the rich men in $10,00 suits who parade about as the only worthwhile people while sucking the income from the truly productive 99.9% who make up the rest of our society.  Such a corporate law changes is unthinkable, though.  Won’t happen, not even if all Tea Party politicians were thrown out of office tomorrow noon.

I am a physicist with years of work in fusion labs, industry labs, and teaching (physics and math). I have watched the tech scene, watched societal trends and am alarmed. My interest is to help us all improve or maintain that which we worked so hard to achieve.
View all posts by LastTechAge →
This entry was posted in Natural Resources and tagged Bakken Oil liability, Grist, Heather Smith, Lac Megantic, Montreal Maine and Atlantic, Oil train, tank car rules, Warren Buffett. Bookmark the permalink.