EPA Limits Mercury in Environment – Is it enough?

Are the new EPA power plant rules strong enough? Will they work as popularized?

The Environmental Protection Agency just announced (2011 Dec 21) that it has issued its CSAPR  (cross state air pollution regulations) will begin to enforce emission standards on coal and oil fired power plants. This has been in process for at least 20 years.  The final link in the protection chain was Wednesday’s release of MATS (mercury and air toxics standards).  Actually, this is a huge step that could/should have happened 3 or 4 decades ago; it will protect our children as they grew from fetal infants to adult.  Quick answers to questions at the top:  The rules are important for cleaning our breathable atmosphere.  Given the chance, they will work but will not reduce all mercury etc. to zero.

Emission compounds.  Even if it had no effect on mercury releases (source of 50% of atmospheric mercury), it will eliminate 90% or more of the current emission from coal and oil  EGUs  (electric generating units), including arsenic (current contribution: 62%),  acid gases (77%)  SO2 (60%)  and a host of smaller contributors, including breathable fine particles.  Our EGUs are the dominant contributors of atmospheric pollutants.

Timing: These rules have a 4 year implementation time built in. This is hugely more than needed, the power industry has known about this and fought against it for 2o years, at least. The EPA says that we have the 40% refuseniks who are now obligated to do the upgrades.  There is a lot of money here, many of our ultras are top people in the power industry, so expect a lot of whining in the near future. The resistance to this was pretty strong, check Mercury, Power Plants, poison.  I suspect this will end up like unleaded gas and seat belts – huge industry resistance, enforced federal requirements, then dancing pride about their forward leadership in the issue.   Whatever.  We should see the start of clean air in 2015. 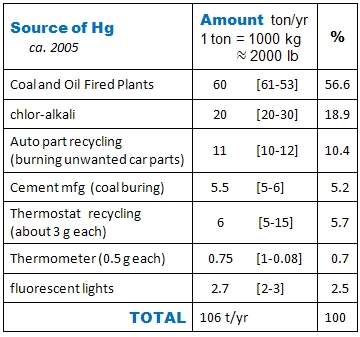 Mercury (Hg):   A simple answer on EPA impact is made difficult by several factors – option choices for remediation , different kinds of EGUs to upgrade, all these mean the exact overall reduction is hard to state right now.  The EPA estimates an approximate 90% reduction in Hg once the new requirements are standard operating procedures. Other pollutants might be reduced by 99%.

We will use: EGU-caused Hg pollution in 2015 will be 10% of their current levels.

Fig. 1 uses our original oil-coal estimate, see Fluorescents-6 for details.  The % of total is quoted with 0.1% accuracy so the column would sum to 100%, but probable accuracy is no better than ±0.5%, and in some cases worse. 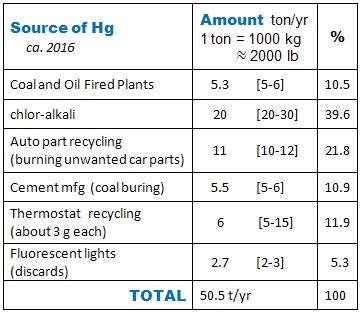 After all the startup delay, environmental Hg pollution should look like  Fig. 2.  This is a halving of the mercury going into the atmosphere then the lakes, etc.  We still have an optimistic 5 t/yr accidental emission from EGUs.

Figs 1 and 2 differ in their Coal and Oil Fired Plants row.  Fig 1 60 t/yr is from a different source than the EPA.  Fig 2 uses the EPA 53 t/yr in 2005.  You will find different values for this in different references.  Although changing from 53 to 60 changes the far right column only in the decimal place, we optimistically use 53.  The fluorescent lighting entry is from our estimate of mercury release due to people discarding, not recycling their burned out lights.  Thermometers is dropped here, because it will have been 15 years since they were totally banned and the entry into the waste stream will have become trivial.

By 2016 the power plants’ contributions to Hg emission will have decreased to 10.5% of the total. This is nearly 5× drop and all due to the rules.  This is not zero and is about the same as our highly regulated cement plants.

This is really positive, but the spin could sound shocking. Scientists tell us that we have solved our problems, but we regulated and controlled and only dropped environmental mercury by half.  Personally, I felt a huge relief when this was announced.  It has taken only several hundred years to accomplish:  mad as a hatter is a very old phrase referring to the brain damage caused to people using mercurized sewing thread. It was essential to reduce emissions from power generators, our next task (look at Fig 2) will be to reduce the release by the chlorine users (via product wastes) and the auto-part recyclers (via incinerator exhaust).

This does not represent government gone bad, as per Rand Paul, but is the very reason for government’s existence. People group together for common defense. For example, local warlords would ravage and enslave regions; effective cooperation makes the countryside safe from thugs. We need cooperative joint protection of a responsive government. We are surrounded by special interest destroyers who work to eliminate what holds us together as a people.  Use a similar analogy toward producers of environmental toxics that freely damage the next generations.  (Plural because babies are continuously born yet another generation in +20 years.)

There are many reasons to applaud EPA’s courage and hope Obama does not compromise this into oblivion.  This is a start, now let’s eliminate the next 1/2 of our mercury emissions.

Charles J. Armentrout, Ann Arbor
2011 Dec 23
Listed under    Natural Resources    …thread   Natural Resources >  Pollution
Have a comment? Click on the title of this post, go to bottom, let us know.
Related posts: Click the INDEX button under the Banner picture

I am a physicist with years of work in fusion labs, industry labs, and teaching (physics and math). I have watched the tech scene, watched societal trends and am alarmed. My interest is to help us all improve or maintain that which we worked so hard to achieve.
View all posts by LastTechAge →
This entry was posted in Natural Resources and tagged CSAPR, emission standard, epa, mercury pollution. Bookmark the permalink.